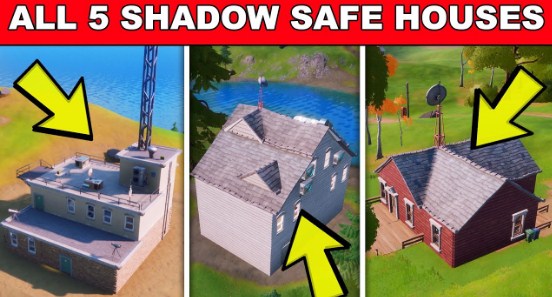 You have remember that in this second batch of challenges for Fortnite Season 2 Chapter 2, the players are tasked with visiting five Shadow Safe Houses. For your information, Shadow is one of two rival secret agent cartels now vying for power in Fortnite’s universe. There are various Ghost and Shadow bases and hideouts scattered across the map.

Apparently, there are five locations of Shadow safe houses. There are Alpha, Beta, Charlie, Delta, and Echo that scattered around the map. A few of these is going to require you to enter a nearby Porta-Potty or Dumpster to enter. You are able to find the locations listed on the explanation below.

The Alpha Shadow Safe House is located on the eastern side of Pleasant Park. To get into it, you have to go to the gas station there. Then, you need to enter the porta-potty out back. This appears to be the only way to access this Alpha Shadow Safe House. You are going to be transported into a secret base where the Henchmen will immediately open fire. As Scar likes to say, please be prepared.

The second Shadow Safe House is Beta Shadow Safe house. It located just east of the Frenzy Farm. Remember that it is a gas station. You are able to go to the brick building behind the gas station and hop into the porta-potty that can transport you into the hidden base. Please be ready for a fight.

The third Shadow Safe House location is in a plain building near Craggy Cliffs. Several of these have telescopes and all of them have Upgrade Stations.

This Delta Shadow Safe House is located on the Lazy Lake Island. The Henchman patrol the island, so you have to be careful.

This last Shadow Safe House is located south of Sweaty Sands and north of Holly Hedges, almost directly between the two. It is a particularly unassuming little house, though you will notice the blue-colored fan boxes on the outside.