Are you a Deadmau5 fan?
Did you already catch a full show of Anderson Paak’s concert in Fortnite?
Are you looking for the result of his concert that was held 3 days ago?

Surprisingly, Epic Games has held an event called Fortnite Spotlight concert series. This event staged one of the most popular musicians in the world, that’s Anderson paak. Who is he?

Anderson Paak is a popular American singer, rapper, record producer, songwriter, and multi-instrumentalist from California. If you are an Anderson Paak and Fortnite player at once, of course we guess that you have watched him in the Fortnite event. Anderson Paak’s concert definitely continues this weekend. 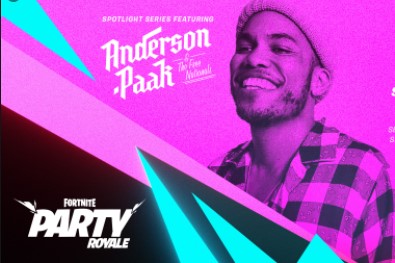 When Was Anderson Paak’s Concert Held?

Moreover, the performance of Anderson Paak has been broadcasted live to the game’s Fortnite party Royale mode on September 19 at 5 P.M ET and the replay of the concert was shown night at 11 P.M ET and Sunday afternoon at 1 P.M ET.

Anderson Paak has been performing live from Epic Games’s studio and soundstage in Los Angeles, California that was built for the purposes of Fortnite concerts.

As the multi-instrumentalist who has won three Grammy Awards for Best R&B Performance for Come Home feat Andre 3000, Best R&B Album for ventura, and Best Rap performance for Bubblin, of course it does not wonder if he has many fans around the world. Because of his popularity, it also led Epic Games to involve him for the Fortnite Battle Royale Party series.

In his concert in Fortnite, he has been accompanied by his backing band THe Free Nationals who plays a variety of instruments including bass, keyboard, electric guitar and drums as well as serving as backing vocalist.

He also performed a continuation of the Spotlight concert series that began last weekend with singer and rapper, Dominic Fike. Moreover, Fike’s concert demonstrates a proper studio and soundstage setup to enable the usage of live instrumentation and vocals. It was also compared to previous at home DJ sets from Steve Aoki, Deadmau5 and Diplo in their Fortnite’s concert one year ago.

In this concert series, there also would be a new artist for the next concert which is scheduled on September 26, 2020. Well, Epic Games also has announced that the series of Spotlight concerts will continue until October.

Of course, there are many questions asked in some Fortnite forums after the Anderson Paak concert a few days ago. Once the concert has been closed, many Fortnite players are really curious about Anderson Paak whether Epic Games will release Anderson Paak skin to Fortnite or not.

About Anderson Paak’s skin, of course there is no official announcement from Epic Games that confirms it. It means that releasing or adding the Anderson Paak skin to Fortnite is so far to discuss.