The Fortnite World Cup Champions are getting their own Exclusive Cup in the form of a Duos tournament. The player named Bugha won the Solos event, while Aqua and Nyhrox won the Duos event at the inaugural Fortnite World Cup that was held last year.

Just like Bugha’s tournament, Aqua and Nyhrox’s Throwback Cup is also open to all competitive Fortnite regions. Aqua and Nyhrox, in partnership with Fortnite (Epic Games), are organizing a Throwback Duo Cup, in tribute to their world championship titles. Open to all, the competition was supposed to take place on July 28 and 29. Unfortunately, Epic Games announced that everything was postponed due to unforeseen circumstances. 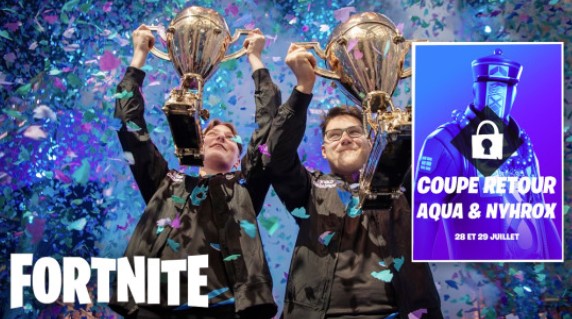 To kill your time while waiting for the Aqua and Nyhrox’s Throwback Cup to be held, it is better for you to know more about the event. Here is the information that you need to understand each word.

Every tournament will be broken down into two rounds, with the best players from the first round advancing to the second one. For those who play in the same region as Aqua and Nyhox, one fewer slot will be available for advancement in order to give the remaining players a chance to take on the best.

On the other words, the top 50 duos in every region will qualify for the Grand Finals with the exception of Europe region (as Aqua and Nyhox was played in this region). In this region, the top 49 duos will need to square off against the World Cup Champions, who will reunite for the first time since splitting after their multi-million dollar win. Players are able to lock themselves into only one region for this tournament. In the tournament, duos are able to play a maximum of 12 matches in around one over four hours. The Grand Finals will give six games to round out the competition in a custom game setting.

Just like Bugha’s Throwback Cup, the Aqua and Nyhrox’s Throwback Cup will also receive a $100,000 prize pool backed by Epic Games. European players get the highest prize pool at stake with $40,000 paid out to the top-10 duos.

The European players will compete for $40,000

Brazilian and NA-West players will compete for $10,000

Oceanic, Asiatic, and Middle Eastern players will compete for $5,000