The players of Fortnite who reach level 100 will now get special rewards. For those Fortnite players who simply cannot get enough of the game, your countless hours put in will reap you a unique set of rewards, once you hit level 100.

The developer of Fortnite called Epic Games have heard the requests from fans for level 100 rewards, giving the extra incentive to go for that final push, even when you have unlocked all of the battle pass gear and skins. This one is known as Battle Pass Tier 100 Challenges.

With the v6.20 update going live on October 24, the data miners got to work digging through the files, and came across three new items that turn out to be specifically made for players who hit 100. With Season 6 well underway, and the FOrtnitemares event now live, there is a lot to play for the season, and so there is no better time to grind away up to hitting the max level and getting all the rewards. Both data miner and Youtuber named HYPEX discovered the three new items. Those are a banner, a spray, and an emoji. All of them will presumably be unlocked upon hitting 100. 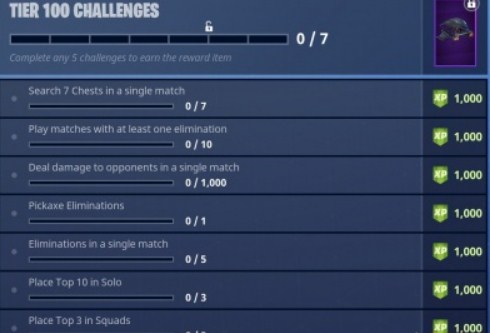 It is still unknown whether those rewards will be for Season 6 or for a future season, but considering they have been added in the v6.20 update, it it likely for Season 6. It is said that the v6.20 update was one of the biggest so far in Fortnite, almost as big as the whole new season, with map changes, new Monster Zombies, outfits, weapons and more.

Epic Games is definitely trying to make sure there is plenty of fresh content and incentive in order to keep playing over the Fall and Holiday period, especially with lots of other well-known games releasing now and in the next two months. In case you have never tried to level 100 before, this season might be the best time.

As stated before, each Fortnite season comes with a special Tier 100 skin, a reward for reaching the highest battle pass level available. Season 11 brings the Fusion skin, here is the method to complete the exclusive Unfused challenges that come with it.

Please take a note that the Unfused challenges are unlocked at tier 100 and there are 8 of them in total; four for the XEV skin style, while the rest are for the VEX style. Those challenges dp not show up to be particularly difficult and are likely stuff you will be able to do in the space of a few games, as long as you are playing you will complete them anyway. The challenges include XEV: Finish top 5 in Duos or Squads (3), XEV: Carry a teammate out of the Storm (1), XEV: Revive and Reboot a teammate (1), XEV: Assist a teammate with eliminations in different matches (10), VEX: Destroy opposing player buildings (25), VEX: Finish top 10 in Solos (3), VEX: Yeet an opponent and deal fall damage (1), and VEX: Eliminate an opponent in different matches (10).