Skip to content
Homepage / Skins / Best Fortnite Skins Ever Made

What Fortnite skins do you think best? Each of you may have your own opinion about the best skins in Fortnite. And even you surely have you own favorite skins in the game. But here, we have a list of the best Fortnite skins ever made and you may agree or not.

Skins in Fortnite are also called as Outfits. They are a type of cosmetic item that players can get and use for Fortnite: Battle Royale. Skins are cosmetic only so they just change the appearance of the player’s character. Skins do not have the game benefit. 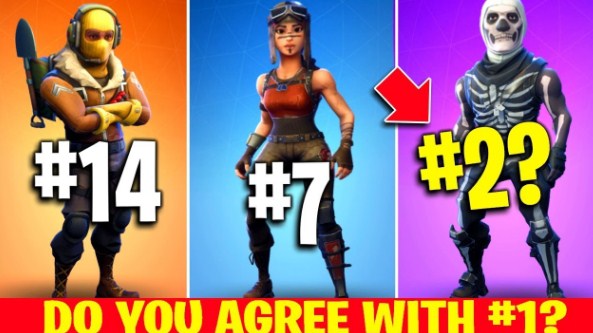 You may not be able to wait anymore about the best skins in Fortnite based our version. Here they are.

This is a Legendary Fortnite skin from the Nevermore set. This skin costs 2,000 V-Bucks when it is listed in the Item Shop. This skin wears a cool jet-black leather outfit with ragged feather-like details that resembles that of a raven. There is a dark hood which covers the whole face in darkness and he has glowing purple eyes.

This is a Legendary Fortnite skin from the Fort Knights set. This skin was available via the Battle Pass during Season 2 and it was able to be obtain at Tier 70. This skin resembles an armored knight in jet-black. He wears a black helm, black vest and also black pants.

This skin is an Epic skin which was available via the Battle Pass during Season 5. This skin was able to be unlocked at Tier 87. This skin has a smart-looking woman who wears a white sleeved polo under a black office vest and a pencil shirt. This skin also wears yellow glasses and carries some bandoliers for combat.

This skin is a Legendary Fortnite skin from the Space Explorers set. This skin was available via the Battle Pass during Season 3. If you want this skin, you were able to unlock it at Tier 70. This skin has a dark space suit with glowing orange stripes and also a closed pitch-black space helmet.

This is an Epic Fortnite skin from the Red Riding set. This skin was available via the Battle Pass during Season 6 and it was able to be obtained at Tier 47. This skin is a female avatar which was inspired by the famous story The Red Riding Hood. This skin is based on the protagonist of the story. She has a red braided hair girl and she wears a red hood, a red skirt and also a tattered white medieval shirt. This skin also wears a pair of high boots and a big belt with some bad-ass accessories and it depicts a non-fragile protagonist who looks like she has killed a lot of wolves in her life.

Well, these are 5 of the best Fortnite Skins ever made of our version. Do you agree with it? If you have your own opinion about other skins which you think they are best too, you are able to type them in the comment below.