Guns in Fortnite Save the World can be sorted into Assault Rifles, Pistols. Sniper Rifles, Shotguns and Explosive Weapons. All of the kinds have the best weapons of their class regardless of the hero of the played by the player.

Here are all the best guns in Save the World. some of them fulfill different roles. Therefore, please take a note that our preferred class is key.

Assault Rifles are known as the most universal and often the best guns in the Fortnite Save the World as they are easy to use and deal tons of damage. In addition, almost any class is able to make great use of these weapons.

This one is considered one of the best, if not the best, in Fortnite Save the World as it is fully automatic, has decent durability and does a lot of damage. The other stats of this one such as Crit Chance and Damage are similar to most other Assault Rifles but this one stands out in medium to close range combat due to its high rate of fire, good damage and durability. 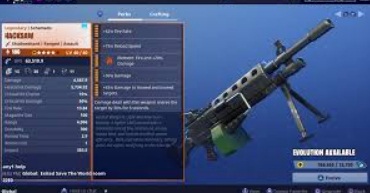 This one is quite rare as it is only available during the Road Trip and some other events of Fortnite Save the World. Actually, it is easy to find through trading or buying online and is able to be amazing Assault Rifles. This one stands out due to their high headshot damage, an added suppressor and incredible accuracy. For those who love to land headshots for massive damage should give it a try.

This one is unique Assault Rifles as unlike most of its counterparts they are meant fir close range engagements. While the accuracy quickly falls off if the targets are far away, it close quarters, this gun is the most likely the best AR in the game. It is only available through the Event Store during the Blockbuster event but rumor says that it will make a comeback in Season 9.

Aside from those three, Hacksaw, Pain Train, Hemlock, and Grave Digger are great and a worthwhile to any loadout.

Sniper Rifles in any game are the measurement of the accuracy and skill of the player. In the game called Fortnite Save the World, a great Sniper Rifle will take out Husks with ease and remove any remaining threats quickly.

Pistols are really important in Fortnite Save the World as many classes have buffs for them. Having a good one will often make missions and taking out enemies significantly easier and, for some classes, be the main point of their loadout.

Shotguns can be described as the classic range weapon in any game or action movie. In the game named Fortnite Save the World, they can be extremely useful in certain situations, especially if a close range Assault Riffle or Pistol is not available.