Brutus is the name of another kind of a bulky skin in a form of an FBI agent that shares a very slight resemblance to Cobra Bubbles from the Lilo & Stich franchise. This one is from the Brute Force set. It was available through  the Battle Pass during Season 12 and could be unlocked at Tier 20. 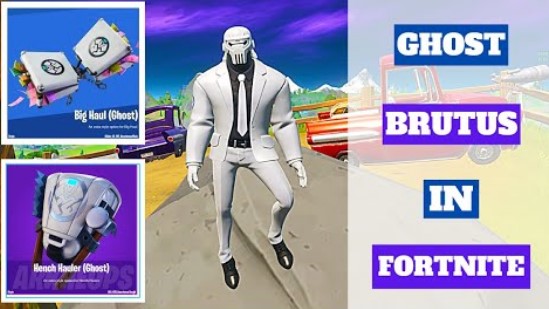 Brutus skin has 4 edit styles. Those include Default, Ghost, Shadow and Enlightened or Golden. The Ghost edit style of him might be a reference to the Marvel Villain, Mister Negative, wtith a helmet piece similar to that of a Stormtroopers, combined with the eyes of Baymax from Big Hero 6.

The logo of Brutus skin is really similar or nearly identical to that of Chaos Agents. The logo is bale to be seen on most of the cosmetics in his set (Hack & Smash), Cash Grab, and so on), as well as on his Ghost (and Shadow) styles). It is able to be assumed that Brutus presumably looks up to Chaos Agent. Aside from that, this is also a nod to him joining A.L.T.E.R.

Brutus Ghost faction is dressed mainly in white while the Shadow one is dressed mainly in black. Basically, all those waistcoats and tuxedos will be shimmering white, and the new Meowscles skin will have a creamy white fur. All the six agents are more vibrant in the Ghost faction and all the skins include more colors than the Shadow ones. As the contrary, the Shadow faction dressed those agents in darker more ominous colors, which is appealing to a lot of players of Fortnite. Meowscles eyes of Brutus Ghost are a demonic red rather if you have the Brutus Shadow, for instance. Every skin is characterized by a spy theme, so the shadow skins come across more threatening and traditionally villainous while the Ghost skins have a more flashy look at me theme. With those options, the players of Fortnite are having to make a difficult choice between Brutus Shadow and Brutus Ghost, and it is changing how the game looks.

Fortnite Ghost faction skins look a little more distinct compared to the Shadow faction ones. In addition, there is a little more color across the board. When it comes to the appearance, Brutus is similar to the oddly like a Stormtrooper with his Ghost variant, while Skye stands out as she is not wearing any white at all.

How to unlock Brutus Ghost in Fortnite? For those who want to select your Ghost variant skin then you will have to go to the Agents section of the secret hideout, that is located at the top left of the screen. There, you are able to look at each of the customizable Battle Pass skins and choose the option that you want, which is Ghost. Keep in mind that not all of those are able to be unlocked.