Another combination event has come to Fortnite, this time taking players of the massively popular Battle Royale game to the galaxy far, far away. In order to celebrate the launch of the Star Wars Jedi: Fallen Order on PC, PS4, and Xbox One, the developer of Fortnite named Epic Games have added a brand new skin to the game.

The outfit or the skin is called Stormtropper. What is Stormtropper? This one is modelled on the famous Imperial Stormtropper seen in the Star Wars saga, specifically the design of those featured in the original trilogy of the films. 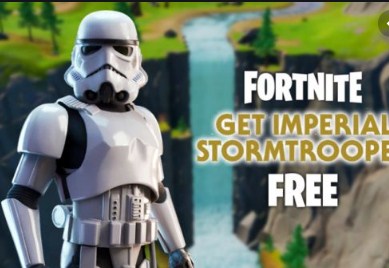 Once you have purchase Star Wars Jedi: Fallen Order on the store owned by Epic games during the promotion period, you need to log in to Fortnite with the same Epic Games account, and you will have the Imperial Stormtropper added to your Fortnite locker. Please take a note that the offer is available until 30 November 2020, so you have a plenty of time to get your hands on the outfit. For those who have already purchased the Imperial Stormtropper in the Fortnite in game shop, and you then purchased Star Wards Jedi: Fallen Order, you will get 1500 V bucks instead of the outfit.

Can you get Stormtropper outfit for Fortnite on PS4? Since the event is the celebration of the launch of Star Wars Jedi: Fallen Order on PC, PS4, and Xbox One, everyone who uses PS4 can definitely purchase Stormtropper.

What else is new? If you see the short clip used to announce the Imperial Stormtrooper arrival, the Imperial Star Destroyer has also appeared in the skies above the new map of Fortnote. At the time, the ship is too far away to have any bearing on how games play out, but there is always a chance it could drift ever closer, setting off some in game events as it does.

What is the thing called Star Wards Jedi: Fallen Order? Fallen Order is known as the brand new games story in the Star Wars saga. Set after the events of Episode III: Revenge of the Sith, you will play as the rogueish jedi padawan, Cal Kestis. Cal Kestis is the name of one of the last remaining Jedi following the Galaxy wide, Darth Sidious ordered purge of Order 66, that has the purpose to cleanse all the star systems of the stoic warriors in order to make way for the rise of the Empire.

Star Wars Jedi: Fallen Order is the single player, story-driven action-adventure experience, something that fans have been clamouring for after the 2015’s miltiplayer focused Star Wars Battlefront and its 2017 sequel, played from the third person perspective.