Have you ever seen Cloaked Shadow skin in Fortnite? If you have seen it, you may wonder when this skin was released. You are able to find the answer here because in this article we are going to give you some review about this skin including the release date of this skin.

Cloaked Shadow skin is an Epic skin in Fortnite. This skin has Christmas elements with the red gold outfit and the horns that can be the same as reindeers. The look of this skin is mysterious as well since all over his face is black but his eyes are lighting. 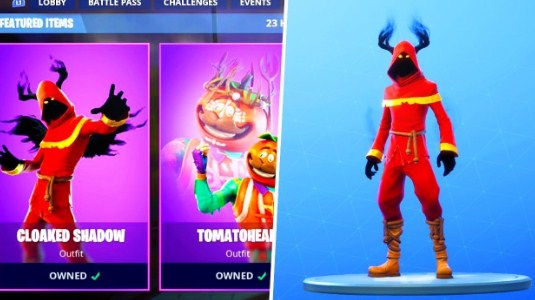 This Cloaked Shadow skin was released on December 27th, 2018. So, no wonder why this skin has Christmas elements since it was released near the Christmas day. The last seen of this skin was on March 16th, 2020.

Where to Buy Cloaked Shadow Skin

This Cloaked Shadow can be bought in the Item Shop when it is listed for 1,500 V-Bucks. This price is affordable enough for all player since it has interesting look. Until now, this skin has appeared in the Item Shop for 12 times.

The Look Of Cloaked Shadow Skin

The Cloaked Shadow skin features a red cultist-like hood and robe. This skin is a male so he looks like a mysterious man. The face of it is covered in shadows , except for his yellow eyes which are glowing. This skin also has a pair of black horns which emits a smoke like an aura which pops out of the hood. In his waist and his calfs, there are brown ropes which coil there. This skin comes with the epic back bling item named Shadow Wings. So, it is worth to buy it since the skin has a simple design with this cool back bling.

For your information, this skin is not a part of any set. So, if you want to have this skin, you have to buy this alone in the store. However, as mentioned earlier that this skin comes with a bonus back bling item named Shadow Wings.

After you know about Cloaked Shadow skin and then  you watch how this skin in the videos above and then you are interested with this skin, you are able to buy this skin when it is available in the Item Shop.