Let’s find out the true facts for it below!

Why is Conor McGregor Popular in Fortnite?

Conor McGregor is well-known as one of the best martial artists in the world. He is famous for his special walk when they come to the stage for battle. Evidently, his amusing dance makes many fans in the world really entertained with it. His dance movement shows looking like the hands and legs boneless. 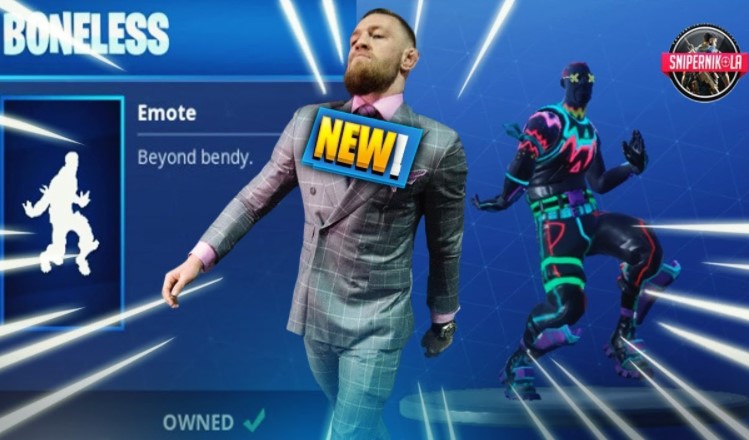 Not a long time ago, Epic Games officially released a new Fortnite emote named ‘Boneless’. Surprisingly, a lot of people remember McGregor walking. Then, many fans of Fortnite guess that the boneless Fortnite dance is inspired by McGregor’s loose-limbed flailing. Well, if you also see the boneless moves, you may also remind Mc Gregor.

Boneless is a Rare Fortnite emote which was first added to the game in Fortnite Chapter 1 Season 4. Due to this being a paid-item of Fortnite, you surely can get this emote with V-Bucks by making a purchase from the Item shop.

This emote dance looks rather silly as the player bends his/her parts in a silly way. In other words, this emote dance is moved for the character which is boneless.

To recognize well for the Boneless emote dance, let’s find some facts of this emote as follow:

How Popular the Boneless Emote Dance is!

So as with the Boneless emote dance, if you want to see how popular this emote is among the Fortnite players, you certainly can visit one of the Fortnite tracker sites. Here, we use the fortnitetracker.com to track the Boneless Fortnite emote. The site results:

Here’s for the sale history of the Boneless Fortnite emote:

Unfortunately, the Boneless Fortnite emote is not available everyday in Fortnite Item shop. If it’s in its diary rotation, this emote actually will hit the Fortnite shop. Well, when you see that the Boneless emote is already available, better for you to grab it as soon as possible before it disappears again from the shop.

You may also wonder how the McGregor walk when he comes to the stage, may not you?

See the Cornor McGregor walk when he’s in battle stage at https://www.youtube.com/watch?v=nW7_0J9n2YY entitled  “THE MCGREGOR DANCE” IS ADDED ON FORTNITE!!!

What do you think? That looks quite similar, isn’t it? Of course, it wouldn’t be the first time which Fortnite has looked to the popular culture for inspiration that finally will add to Fortnite. Previously, there was a viral dance named “Shoot” from Memphis rapper, that’s BlocBoy JB’s which recently added to Fortnite.

However, this is such a great way for Epic Games to appreciate any artist, dancer and also professional for their original masterpiece. Besides, it can also add the collection of more Fortnite items in the game.