Corrupted Voyager is the name of an Epic rarity Fortnite skin. You are able to get it from the Item Shop for 1,500 V-Bucks. This one is included in the Space Explorers set. It was released on August 21, 2019. Do you want to know more about Corrupted Voyager Fortnite skin? Do not forget to read the whole article. 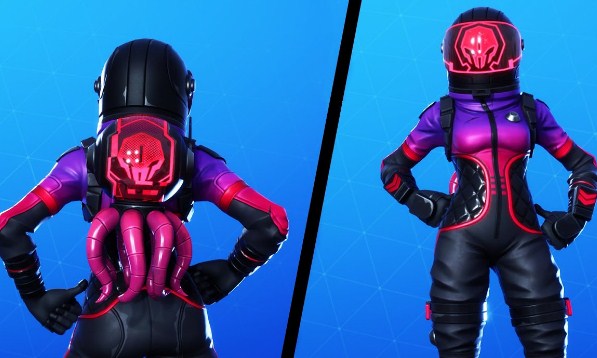 Corrupted Voyager can be described as a female skin presented by a brutal woman. Her whole body is covered with her costume. You are not able to see any part of her body. On her head, the girl has a big black helmet, on the glass of which there is a red geometrical painting which makes her image really frightening.

Corrupted Voyager has a warm baggy jumpsuit that has a pretty color gradient from purple to pink on her chest and black details with red lines in the other parts of it. This one is wearing a strange red glowing round bag on her back which additionally has a few purple wires. She is wearing a pair of black gloves with the paintings of two red arrows. On her legs, you are able to see some straps fixing her jumpsuit well. The warm black and red boots of her are completing the whole image. In general, the skin looks very scaring and, at the meantime, really cool.

If you have any question about Corrupted Voyager, you might find the answer below.

Answer: Corrupted Voyager may be purchased with V-Bucks from the Item Shop when it shows up. Aside from that, most skins from the shop are able to be received as a gift from the other players (your friends). This skin will change the look of your character, though skins do not grant the player any competitive benefit.

Answer: Corrupted Voyager is able to come back to the Item Shop. All that should be done is to check it regularly.