Diplo is known as a popular American DJ, songwriter, and record producer based in Los Angeles, United States while Fortnite is the name of the popular games that has a lot of followings in the world. What is the correlation between the two? You can find out the details below.

The popular game called Fortnite hosted a surprise Party Royale event on Friday evening, and a lot of players may have missed it given the short turnaround time between the announcement and the real show. Fear not Battle Royale faithful, because this page got the full recap of the proceedings. 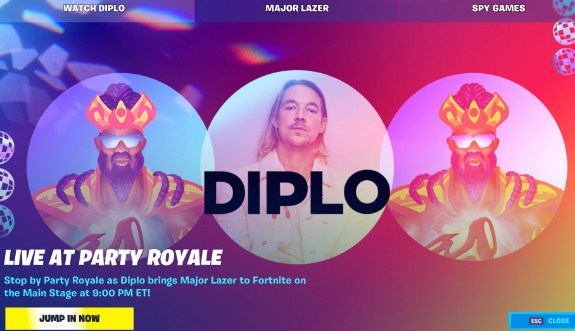 The event named Fortnite Party Royale was announced via the Major Lazer Twitter account at 8:20 p.m. EDT on Friday. It was just 40 minutes before the concert was set to start at 9 p.m EDT. Once the time came, all the players gathered into the Party Royale lobby and went to the main stage area in order to watch a message from actor and Fortnite fan Jordan Fisher. After a short explanation, Diplo tool the virtual stage for about 20 minutes to play some songs such as Rave de Favela (Major Lazer ft Anitta & Mc Lan), Que Calor (Major Lazer ft J Balvin & El Alfa), Blow That Smoke (Major Lazer ft Tove Lo), Lean On (Major Lazer & DJ Snake ft. MO), Light It Up (Major Lazer ft. Nyla), Believer (Showtek & Major Lazer), and Lay Your Head On Me (Major Lazer ft. Marcus Mumford).

When the vent finished, players were given the Neon Wings Back Bling for their participation. Aside from that, the Major Lazer skin was also sold in the Item shop for 1,500 V-Bucks as well.

Apparently, the Major Lazer Party Royale event occurred to drum up hype for the upcoming Party Royale mode of Fortnite. while the debut of it hosted this special event, Fisher discussed its normal implementation as a place to hang out with your friends, race boats, perfect your skydive, literally whatever you want. The mode leaked as part of the 12.50 update earlier this week and it is officially described as follows. It is stated that Party Royale is a new experimental and evolving space. The players can leave their weapons and mats behind. In short, it sounds like an expanded version of Playground Mode with a greater emphasis on fun and non-combat activities.

As for the performance of the event, a member of Major Lazer known as Diplo is a Jamaican-American EDM trio that has been nominated for MTV Awards, Teen Choice Awards and Kid’s Choice Awards alike.

If you missed the Party Royale event, there is an in-game rebroadcast scheduled for Saturday at 10 a.m ET, according to Epic Games. You are also able to watch the full video of Diplo’s performance captured by Game Spot. In addition, you are able to hear their sound by playing any of the songs mentioned above on your favorite music streaming platforms such as iTunes, Spotify, and so on.