Some outfits or costumes in Fortnite looks unique and one of them is Fishstick. This skin look very different from Fortnit skins which are usually released. This skin look like a fish and it looks weird and funny as well. How is actually the look of this skin? Is there any other styles of this skin? If you have never seen or even never known this skin, you’d better find out the information here.

This Fishstick costume was released on Fortnite on December 26th, 2018. This skin is categorized into a Rare skin and when it is listed in the Item Shop, it can be bought for 1,200 V-Bucks. As we mentioned above that the look of this skin is very unique. It is very totally different than all other available skins in Fortnite. His body is orange like a Koi or Goldfish which has morphed into a humanoid. There is also a Saltwater Satchel back bling on his back and it is not standard for the rarity. He has goggled eyes with wide yellow lips. He also wears a blue jumpsuit with a brown belt and there are some pockets in its belt. On his head, there is also brown hat. 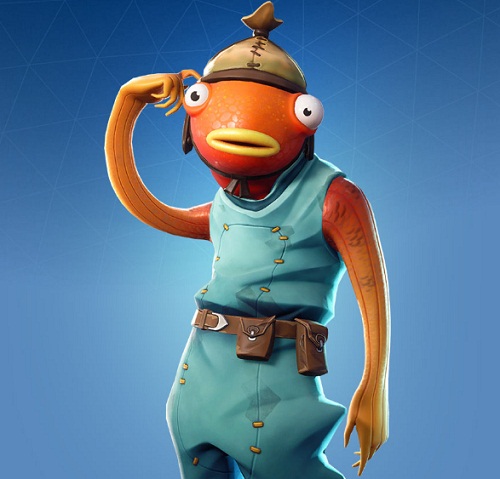 Fishstick costume has 4 styles and the styles include:

Each of these styles corresponds with the theme of the season of the game, Season 8 being pirates, Season 9 being futuristic and the 4th version being the World Cup 2019.

Besides available in these styles, Fishstick skin are also available in a military version and it is called Triggerfish and also a winter version which is called Frozen Fishstick. The first appearance of the Triggerfish skin was on November 22nd, 2019 in the Item Shop. However, this skin was first seen in the trailer for the Imperial Strormtrooper skin. Even though the look of this skin is almost the same, but it is important for you to know that Triggerfish is separate from his normal counterpart, Fishstick. Triggerfish skin has 3 styles including with face paint, without face paint and with helmet. How about Frozen Fishstick? This skin is a part of the frozen series skin rarity in Fortnite: Battle Royale. This skin was released on December 23rd, 2019 alongside the Polar Legends set. For your information that this skin is another re-skin of Fishstick.

You are able to watch some video reviews and gameplay of Fishstick on Youtube. Here are the videos that you can watch:

So, you are able to watch the video first while you are waiting for this skin to be available again in Item Shop.