Fortnite always give the players the things that make they fun in the game. There are challenges, events, competitions and more. And now, there is Arena Mode in Fortnite. Do you know what it is? If it is a competition, then how is the points system in the Arena Mode? Let’s find out about it here.

What is Arena Mode?

Arena Mode in Fortnite is a new way for Fortnite players to be able to compete with other players in game settings which are professional.  In this mode, you are able to get a place in major online and offline competitions with money as a prize. This mode include permanent Solo, Duos, and Trios game mode with competitive settings. As a player, you will have a rank which is represented by your division. and you will begin in the Open League, Division One. You will rank up to Division 10 which is the Champion Division III by getting points named Hype based on the number of eliminations that you get and your placement in each match. In case you can get a certain number of Hype points in some matches, it will allow you to go to the next Division or League. 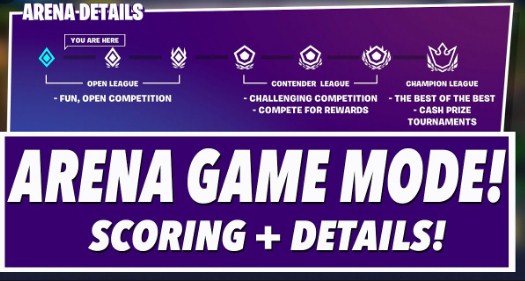 There are 10 Divisions in total in Arena Mode and those are divided in Open, Contender and also Champion League. Here are the details of the divisions.

This mode has been in the game a little while but has been reworked for Season 10. The new Season 10 Arena Mode will decide whether you are able to enter the Fortnite Season 10 Championship Series. You may wish to be able to play Fortnite with the most competitive of players. So, Arena mode is the place to begin.

How is the Points System?

How about the points system in this Arena mode? You have to know that the scoring in the Season 10 Arena Mode is decided by hype points. Every victory Royale will get you some hype points, but you can get them for staying alive and getting eliminations as well. Here are the details of Points System.

It is important for you to know that the hype points stack for placement. So, if you are able to place in the top 2, then you will be able to get the points for top 25, top 5, and top 2 placement.