Fortnite: Battle Royale has a mode named Arena mode which was introduced with the v8.20 update. It is a new way for Fortnite players to be able to compete with other players in professional game settings and get a place in major online and offline competitions with money as a prize.

In this Arena Mode, there are permanent Solo, Duos, and Trios game mode with competitive settings. It means that it is not like Events and Tournaments since it is always enabled for players. In this mode, you as a player will have a rank which is represented by your division. You will begin in the Open League, Division One. You will be able to rank up to Division 10 whcih is the Champion Division III by getting points named Hype based on the number of eliminations that you get and your placement in each match. If you are able to get a certain number of Hype points in some matches, it will permit you to be able to head to the next Division or League. 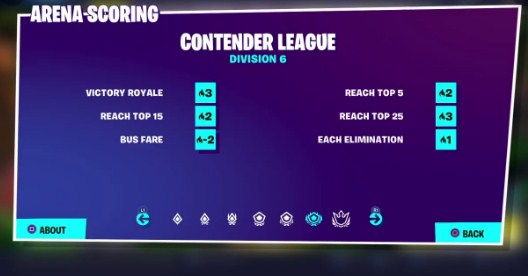 In the Arena Mode, there are 10 Divisions in total and those are divided in Open, Contender and also Champion League. Here are the details of the divisions.

As a Fortnite player in Arena Mode, you are able to get Hype in all divisions and it will be based on the number of eliminations that you get and also your placement in each match as we mentioned earlier. If you join the Solos and Trios, the Hype that you get for each of these are similar. However, you pay Hype in high divisions to be able to play each match.