The Sun Soldiers set has come to the Fortnite Item Shop. This one includes two new skins, a glider, and a harvesting tool. Each of the Sun Soldiers item showcase an Aztec style similar to the new Sunny Steps location.

Among the items of the Sun Soldiers set, Sunbird might appeal to sweaty players who love minimalist female or girl skins. This one is also known as Fortnite Aztec girl. Sunbird is the name of a Rare Skin in Fortnite Battle Royale. This one is able to be obtained from the Item Shop for 1,200 V-Bucks. The skin appeared for the first time on March 8, 2019. 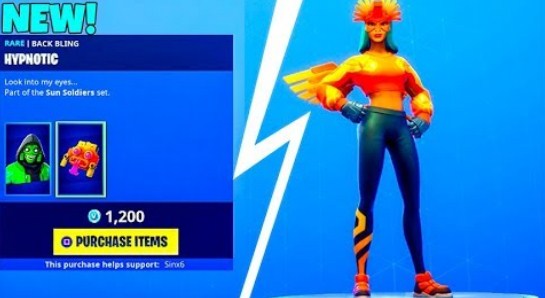 How is the design of Sunbird? Sunbird is the name of the skin that contains a girl wearing a mask that looks like a bird. This one wears an orange mini shirt with black skinny having orange strips on it. The girld wears heavy joggers with orange and white strips on them. Aside from that, the skin also comes with the wacky bonus back bling item named Sun Wings.

Sunbird is able to be seen in the Loading Screen Mezmerized with Mezmer. This one was last seen in the Item Shop on March 25, 2020. In 2019 World Cup, two popular streamers named Nav and Tfue used this skin.

The Sun Wings refers to one of the rare back bling cosmetic items for the game Fortnite Battle Royale. Back blings in general are items that are often in the form of bags, capes, and shields. All of them do not provide any added function or give any advantage to the players. They are created for aesthetic purposes only.

The Sun Wings features golden and orange metalic, structured wings. Both wings are solar powered. As mentioned earlier, the Sun Wings is the bonus back bling item of the skin called Sunbird. Even though this one is bundled with the skin, it is able to be used in pair with the other skins.

Mezmer can be described as pretty neat looking and everyone expects it to sell well. This one is a skin that gives an avatar a green skin, big eyes, and zombie-like teeth. It combines horror with comedy. It features a horrifying zombie dressed in a hoodie with the hood up. The character wears loose pants with sneakers as shoes. The 3D model of it shows it having a keen eye on its surroundings. The skin called Mezmer comes with the rare Hypnotic back bling, which is also a  part of the Sun Soldier set.