Fortnite Chapter 2 features a lot of new additions like fishing, more foraged items, a new map, polished weapons, and even bots. Bots are really active in Fortnite, which has lead to the players being curious how to play with them.

While it might seem weird to try and boot up a game having nothing but these easy mode opponents, a lot of players have expressed interest in it. it doe snot matter whether for the fun of running around by yourself, the ability to practice certain plays without opponents getting in the way, or just to have some fun, playing with bots seems like an alternative way. 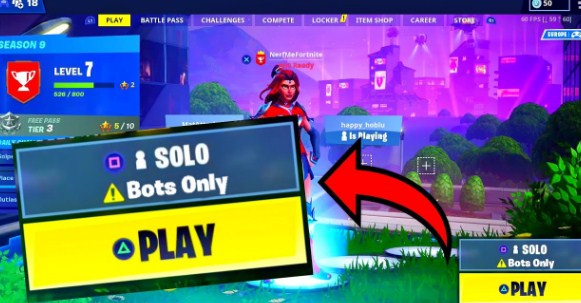 The existence of bots themselves has lead to some paranoia. The thing called robophobia seems to have taken a grip on the Fortnite community. People have become prone to assuming everyone that screws up their plays is a bot. The rumor has even spread to competitive players, some have been venting about bots entirely ruining their games. Bot is a hot topic for the players of Fortnite. even if they are irritated about having them in their games, a lot of them want to spend some time among the bots.

For those who want to know how to play with bots, there are two options for you. One of them is not exactly allowed, but it is possible. Another occasionally gets shut off and needs you to do a bit of legwork. Using these two might not be as straight forward as dropping into a match, but it seems Epic is not keen on the idea of playing with only bots, meaning you are going to need a workaround.

One of the two methods is the one with a Content Creator code. Some people think it is Fortnite bot servers code but the real term is Fortnite Content Creator code. This one is a little bit harder compared to the other but it is above board and more reliable. The only issue is that it was disabled in the last patch until a few issues are solved. The way should start working again in the future, so it is helpful to know about it for now.

In order to pull this off, you need access to a social media account with more than 1,000 followers or a friend with that amount. Here is how you do it. The first thing that you have to do is to sign up to the content creator program. Once you are registered and approved, you will get control over custom matchmaking. You need to make a game and use a Custom Matchmaking key. It will boot you into a game, with no one else around unless they know your matchmaking key. Fortnite will normally fill itself up with bots once a couple of players are in there.

Actually, this method is currently disabled. However, it is likely to come back online soon. Those are the only methods to play against bots for the time being.