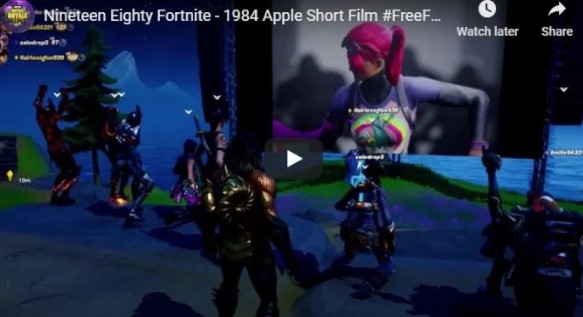 After the Fortnite was removed from the App Store, Epic Games recently replied by filling legal papers which are announced to tweet on the official Fortnite account. It seems not enough, Epic Games also stated more than an hour that they would show a short Fortnite film. In fact, the film has been released sporadically by Epic Games. It was also always posted on their YouTube channel.

Finally, the short parody Fortnite film was announced as Nineteen Eight-Fortnite which will be premiered live in Fortnite Party Royale.

In the end of the short film, Epic Games also attaches that they have defied the app store monopoly. Then, in retaliation, Apple has removed Fortnite from billion devices. Then, they continue with a shocking statement by telling the player to join the fight to stop 2020 from becoming 1984.

Well, if you really want to know the parody short film, you can watch the full video at https://www.youtube.com/watch?v=c1vZWDZ-wfU.

Because of this serious case, Epic Games seems to be taking this removal from the Apple store as well as taking shots at the company in the process.

As the largest computer’s company, Apple certainly dealt a big competition with other companies by announcing a brand new computer called Macintosh with anti-mainstream commercial video.

If you see the Apple’s commercial video from YouTube, you can totally get a deep meaning. As the video showed, there was a line of people with ambiguous genres who were marching in unison through a long tunnel towards the screen shown a Big Brother.

A Big brother here was known as a leader of people who watched him on telescreen. Then, the men with bald heads were represented as subordinates who are restrained by the leader.

While a Big Brother was giving a speech, a woman who carried a sledgehammer was running toward the telescreen. It didn’t take long, she finally hit a telescreen with a sledgehammer that caused the screen to break, leaving the people in shock. More than that the video is such a protest to a totalitarian leader.