Fortnite Dockyard Deal missions have started. One of the Fortnite week 4 challenges sends the players of the game to all over the map to visit the Boat Launch, the Coral Cove, and the Flooper Pond. Where are the locations such as Deal Boat Launch?

All the locations are easy to get once you know where they are at. The Boat Launch is able to be found in the south eastern part of the map, on the southeast of the Misty Meadows and near the snowy mountain top where you are able to find the cabin the zipline. For the location of the Flopper Pond, you need to go north west past the Weeping Woods and the Slurpy Swamp. This one is south of the Sweaty Sands and directly east of the Holly Hedges. As for the last location named Coral Cove, please keep on heading north west past the Sweaty Sands until you have reached the end of the beach where there is a massive coral on the location. 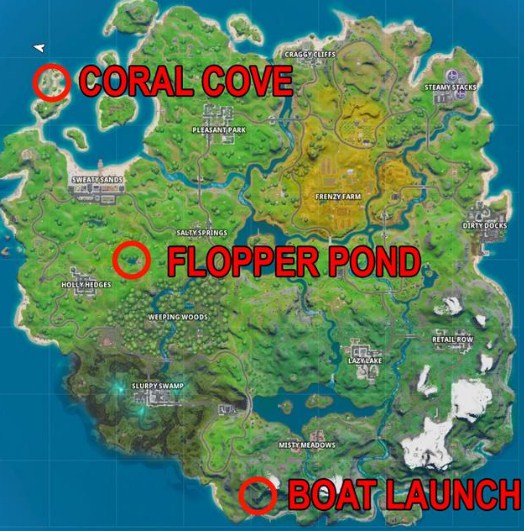 Once you have visited the Boat Launch, the Coral Cove, and the Flooper Pond, you do have to finish some other challenges to complete the weekly mission, including looking for some chests on Salty Springs or Dirty Docks, jumping on a Motorboat through various flaming rings, landing at Weeping Woods, Pleasant Park, and Lazy Lake, and also looking for the hidden T in the Dockyard Deal loading screen.

Since most of the challenges are rather straightforward, there is no need to get a guide for them. However, finding the hidden T can be a little bit challenging. The main reason behind it is because you have to complete 8 Dockyard Deal challenges before you are able to make the loading screen appear, and ultimately uncover where the letter is hiding. Although it is able to be a little hard to see, the letter should be hiding above the smaller street lamp on the scaffolding, located on the right side of the screen. Via the Chapter 2 map, the hidden T should be located in the southwestern area of the Dirty Docks, and you have to go precisely on that spot in order to locate the letter and finish the challenge. Once you have collected all the letters in the game, you will get the exclusive Battle Pass skin after the season ends.

Aside from visiting the Boat Launch, the Coral Cove, and the Flooper Pond, there are some other missions of Fortnite Week 4 Dockyard Deal. Those include eliminations at Pleasant Park or Dirty Docks, search chests at Dirty Docks or Salty Springs, deal damage with Sniper Rifles to opponents, jump a Motorboat through different flaming rings, deal any damage to opponents by shooting exploding gas pump, deal damage to enemy structures with Explosive Weapons, deal damage to opponents from above, land at Weeping Woods, Lazy Lake, and Pleasant Park, explosive weapons eliminations, and search the hidden T found in the Dockyard Deal Loading Screen.