In Fortnite, there are some gliders which the look is like Helicopter. So, sometimes they may be called as Helicopter gliders. Do you have one of them? These gliders are awesome and you are able to have them if they are still in the Item Shop. So, what are they? We are going to explain them here.

Coaxial Copter is a glider skin which is a helicopter-themed and it is only available on the Battle Royale. This glider does not affect the functionality and in-game mechanics of the default glider. It can change only the appearance of the player’s default glider. 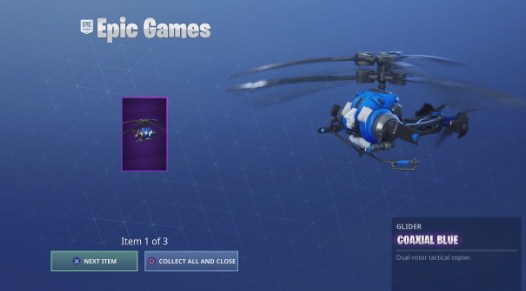 This glider is categorized into an Epic item from Tech Ops set which was released on January 24th, 2019. In the Item Shop, it can be bought for 1,200 V-Bucks when it is listed. As explained earlier that this glider is able to turns the player’s default glider into a miniature fully-functional copter in metal-black paint with various techs and gizmos installed. It cannot lift itself up or propel upwards and functions identically to the default glider. This glider is meant to be used with the Tech Ops but because its modern design and black paint, it can pair well with other soldier-themed skins.

This glider also look like helicopter. It is an Epic item and it can be found in the Fortnite Battle Royale. The glider skin will be able to change the look of the default glider of player but it will not be able to change or alter its performance acceleration, speed, or efficiency. Mainly, skins are for aesthetic purposes only.

This glider transforms the default glider into a miniature medical helicopter which is painted in white with the red and white cross decals. Even though it is like a suitable vehicle for air travel, this glider skin does not provide any added benefit to the control, speed or acceleration of the default glider. This glider skin is part of the Support Squadron set and it can be bought in the Item Shop for 1,200 V-Bucks.

This glider is an Epic glider from the Tropic Troopers set which was released on March 9th, 2019. In the Item Shop, it can be bought for 1,200 V-Bucks when it is listed. This glider is able to change the look of the player’s default glider but it will not change or alter its performance, acceleration, speed or efficiency. Mainly, skins are for aesthetic purposes only.

So, which gliders do you want to have? Or, you may have had all of these gliders. Well, if you have not known the look of these gliders and you also want to know how these gliders work in the game, you are able to watch some Youtube videos about them.