The newest mission set of challenges to hit Fortnite Battle Royale Season X in Week 4 is named Smash and Grab. This one was released on Thursday. All the seven challenges focus on smashing or dealing damage and grabbing or looting things, the fundamental parts of the Fortnite experience.

Actually, they are not particularly exciting, but two of the standard Smash and Grab challenges involve Hot Spots, along with the two prestige counterparts. All the four challenges are relying on the player finding Hot Spots at the start of the match and doing things there. Here are the the things that players will have to do at Hot Spots for Smash and Grab. The first one is land at a Hot Spot in different matches (0/3), the second one is deal damage to opponents at Hot Spots (0/200), the third one is destroy Loot Carriers within 60 seconds after landing from the Battle Bus, and the fourth one is eliminate an opponent at a Hot Spot (0/3). 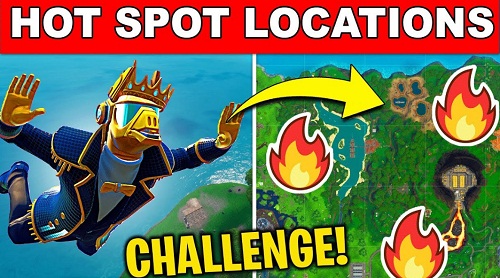 The third and the fourth one are Prestige. It means that the players will need to complete all seven of the main Smash and Grab challenges before the Prestige versions are made available. In the standard set, they also have to search a chest within 60 seconds after landing from the Battle Bus and pick up a Legendary Item in different matches (0/3), among a few others, but those two are also totally possible at a Hot Spot. Please keep that in your mind on your journey.

Where are the locations of Fortnite Hot Spot Season X? At the beginning of the match, one or two Hot Spots will have letter in the color of gold on the map that will replace the standard font of a named location. Added to Fortnite as part of the version 9.10 update in May during Season 9, Hot Spots are known as a competitive and exciting method to earn excellent weapons early in a match, but for this very reason, they are always hot spots for players to land. At every Hot Spot, a bunch of Loot Carrier drones will flutter around, and all of them carry good loot. All the players should be done is to get any kind of weapon from the ground of chest nearby and use that to destroy the drones.

It is said that the individual challenges should be not hard and straightforward for everyone once they find the Hot Spot in their match. Just like the sets of Smash and Play and Worlds Collide missions, among others, Smash and Grab will be active until the end of Season X, so the players have plenty of time to complete those challenges.