The Kingsman umbrella is the name of a Legendary melee weapon added to the game called Fortnite Battle Royale in Patch v12.30. It is very unique, as you are able to use it to block bullets and negate fall damage from the high distances using it as a glider for a small amount of time before dropping again to use at the right time.

The Kingsman umbrella does 50, 60, 55, 55, then 100 damage to players in a sequence of attacks. In addition, it is also able to be charged up to dash forward and deal 75 damage to players and 1000 damage to structures. On top of that, it also deals 75 damage to any structure you swing it at. In the end, you are able to use the Kingsman umbrella as a way to avoid attacks, being able to dodge bullets in the same way as you could dodge with Lightsabers in Chapter 2 Season 1. 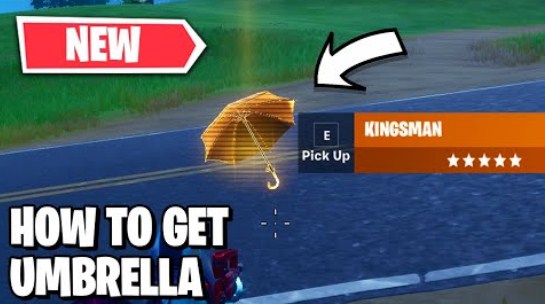 Here is the Kingsman Umbrella information that you need to know:

You will have to grab a Fortnite Kingsman umbrella brolly and shield yourself from damage in this week’s Fortnite challenge. Apparently, bulletproof Kingsman umbrellas were recently added to Fortnite and this week, you will have to deflect 200 damage by using one. All of them are fairly common drop and you are more likely to find them in Henchmen areas like The Agency or The Yatch.

Where are the locations of Fortnite Kingsman umbrella? You are able to find the Kingsman umbrellas in chests, particularly blue ones, though they are able to appear as floor drops in Henchman areas. Aside from that, you are also able to charge up an attack using the umbrella as well as protecting yourself, so it is worth picking one up if you find them.

Talking about the Fortnite Kingsman umbrella, it cannot be separated with the thing called block damage with Kingsman. When you pick up a Kingsman, you will be able to deploy it and use it as a protection, didge with it and use charge to attack opponents. In order to complete this challenge, you will need to block 200 damage from opponents which will be easier if you are facing the links of a shotgun or a sniper that deal immediate high damage.

Please keep in mind that you will only be protected from the front, so please be mindful of your surroundings. They are able to only take so much damage, so weigh up whether you would rather a longer stint with an opponent armed with an assault rifle or a short, risky 1v1 with a shotgun.