Fortnite has Timed Missions that grant bonus rewards like evolution materials, schematics, experience, survivors, heroes, perk resources or V-Bucks. The bonus reward of each Timed Mission is able to be claimed once on completion. They are marked on the map with the clock sign and all the missions rotate every 24 hours.

There are a few kinds of Timed Missions on the internet but only Mini Boss missions are able to give V-Bucks. They are also known as Mini Boss Mission Alerts or just Mission Alerts. V-Bucks as a Mini Boss mission reward is really common and possible as regular mission rewards. The rewards are 25 to 40 V-Bucks on just a mission and the missions change once a day. Please keep in mind that taking and completing the same one again will not grant you the bonus reward. 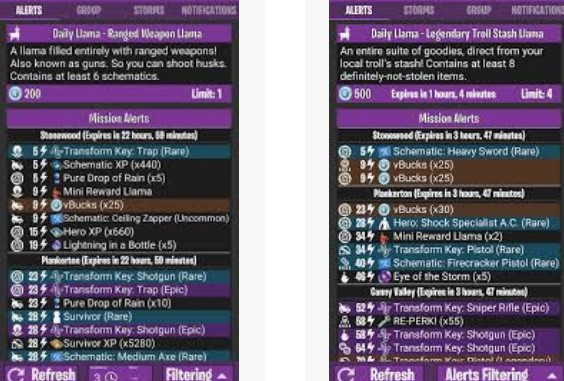 Apparently, progressing on the main questline will unlock the new areas with more missions to play. Every Storm Shild Defense on the questline will uncover more mission spots on that area. You start the game from Stonewood and have to complete the questline of 34 quests in order to unlock the Plankerton. You will earn access to Canny Valley after completing Plankerton questline. The last area you need to unlock is called Twin Peaks. Every area is significantly harder compared to the last one and mor quests are needed for the next area. If you want to get the high V-Bucks rewards, you need to go to the harder areas as they are often found from the harder area. Aside from the new mission spots, you will also unlock different kinds of missions, materials and daily quests as you progress.

The good thing is that you are able to see the current Mini Boss Mission Alerts including all the rewards without launching the game, fetched directly from the servers of FOrtnite Save the World every 15 minutes. It does not matter where the V-Bucks reward mission is, there will be a lot of people completing it for free V-Bucks.

This paragraph is about the history of Mission Alerts. The amount of Mission Alerts available past Stonewood was twice amount to six and Mini-Bosses were added to all of them in patch v2.3. That is why the name changed to Mini-Boss Mission Alerts. Basically, patch v3.4 refocused Mini-Boss Mission Alerts towards Transform Keys and high-rarity items and removed crafting ingredients from the list of the reward. All the changes seem to raise the amount of V-Bucks mission reward from 15-30 to 25-40 V-Bucks. After patch v3.5 Mini-Boss Mission Alerts cannot be selected in Stonewood and Plankerton if you have not unlocked the mission the alert is attached to but you are still able to access it with a higher-level party. Perk resources were inserted to the reward pool in patch v4.2. A few events have more than doubled the amount of missions for the duration of the event. As for the patch v9.00, it removed the daily cap of 3 mission alerts and changed the rotation schedule from 6 hours to every 24 hours.