Do you have all of the cosmetics from the Spandex Squad set? Mullet Marauder skin is one of cosmetics from this set. The skins in this set has retro style and you will feel like you are in 80s. If you buy this skin, you will also get a Boombox back bling.

Mullet Marauder skin is categorized into an Epic skin. This skin was released on August 12th, 2018. It can be bought for 1,500 V-Bucks when it is listed in the Item Shop. This is the male version of the 80s workout skins and the female version of it is Aerobic Assassin skin. It is known that the last seen of this skin was on January 28th, 2020.

The Appearance of Mullet Marauder Skin

This skin has a blonde hair and wears a big sunglasses. He also features a retro-styled blue and purple gym jacket. To emphasize the trending fashion during the old days, he also has a long hair with a mustache. Boombox back bling that he brings makes him look really 80s. 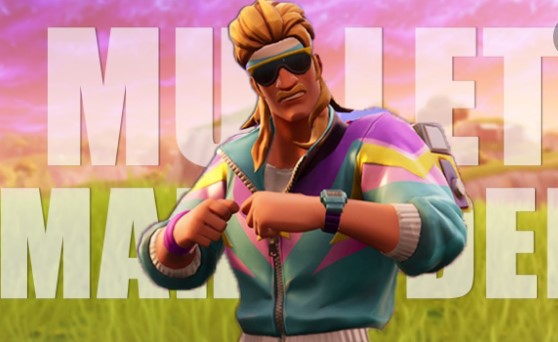 Other Cosmetics in Spandex Squad Set

The rarity of Aerobic Assassin skin is categorized into an Epic skin. On August 12th, 2018, this skin was released and it can be bought for 1,500 V-Bucks in the Item Shop when it is listed. This skin was last seen on October 16th, 2019. This skin depicts a female gym goer from the 80s era. She wears a retro pink, blue and purple gym outfit.  She also has a blue headband on her head and lightning bolt earrings on her ears which emphasize the trending fashion during the old days.

The rarity of this harvesting tool is Uncommon. It can be bought for 500 V-Bucks in the Item Shop when it is listed. It was last seen on October 16th, 2019.

The rarity of this back bling is Epic. The official description of this item is “Put your back into it.”