OG name refers to an name of an account with a short or rare name. For example, a name, like Sam, or maybe just a short name, like SH. There are also some people who have accounts with names like 7.

Do you want to get an OG name in Fortnite? This page will show you a method to do it. Getting an OG name in Fortnite is very simple. The process takes literally one minute. The first thing that should be done is to go to your account of Epic Games and sign in. When it says Display Name, it is the time when you have actually to get your OG name. Commonly, people use English letters. As it will not work, this time, using Cyrillic letters is the perfect decision. 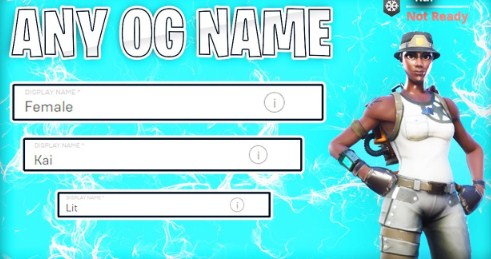 For those who do not have any slightly idea of what the Cyrillic letters are, they are letters for a writing system used for various languages across Eurasia. All of them are used as the national script in various Slavic, Iranic, Turkic speaking countries in Eastern Europe, the Caucasus, Northern Asia and Central Asia. Here is the details of Cyrillic letters and numerals:

The Cyrillic letters might look exactly the same as common English font like they are no different when you look into them. If you see them closer, they are all different compared to the common English letters.