Based on the Fortnite Wiki at Gamepedia, Rainbow Crystal is a crafting material. Now, it is not able to be obtained in normal gameplay. It was given to Fortnite players as accidental compensation for early bug. Epic Games has said if they introduce Tier 6 Crafting to Save The World, this material will not be used. 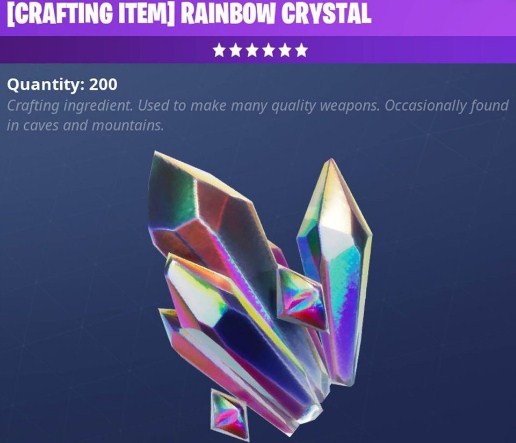 Well, as mentioned above that this is a crafting material in Fortnite. What is material? It is the term which is commonly used to describe the resources and ingredients which are required for building and crafting. As Fortnite players, you are able to break objects in the world to get materials: World Resources which are used in building structures in both Save the World and Battle Royale and Crafting Ingredients which are used to craft Weapons, Traps and Ammunition in Save the World.

There are some basic or non tiered ingredients which are available globally throughout Save the World including Active Powercell, Adhesive Resin, Bacon, Batteries, Coal, Flower Petals, Fibrous Herbs, Honey, Nuts ‘n’ Bolts, Planks, Quartz Crystal, Rotating Gizmo and Rough Ore. There are also Tiered Ingredients which are available in different map locations throughout Save the World; higher-tier ingredients can be found in locations with higher Player Level requirements.