The back bling of Fortnite Red Knight is called Red Shield. Red Shield is counted as a Legendary Back Bling that comes with the Red Knight skin that is able to be purchased from the Item Shop for 2,000 V-Bucks. This one was last seen in the Item Shop on October 2nd, 2019. 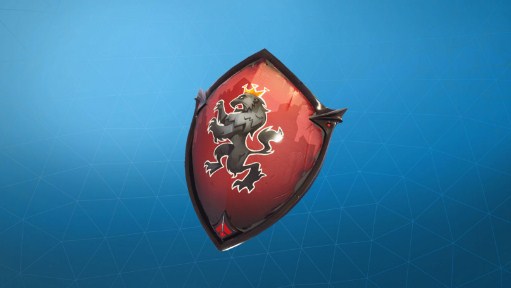 How is the design of the Red Shield? The back item of Red Shield features a turtle shell-shaped shield with black outline, with a black lion symbol in the center with a red background. This one is for cosmetic purposes only and does not provide any function or adds any advantages to the player equipping it.

Red Knight is one of the rarrest Fortnite skin. The developer of Fortnite called Epic Games re-released the skin in the Item shop, the first time it has been available for purchase since February 20th. However, people immediately noticed that something was terribly wrong with it when they went to purchase it from the Item Shop. The iconic Red Shield back bling of Red Knight was nowhere to be seen. Originally, the back bling came as a free add-on with the skin when purchased.

Epic Games was quick to calm the storm. On June 5, they issued an apology statement through its official Twitter account regarding the Red Knight missing back bling upon purchase. They said that they were aware of the skin did not have back bling. In the end, they granted the back bling to anyone who has purchased the skin. Within the same day, each player who purchased Red Knight with the missing back bling were granted with Red Shield.

This update from the developer will likely have calmed a lot of people who have been keen on purchasing the Red Knight, many of whom may have been buying it more for the back bling than the skin itself.

Aside from the Black Shield that came with the Fortnite Season 2 Battle Pass exclusive Black Knight character, the back bling known as Red Shield has often been considered to be among the more popular ones in the game called Fortnite. Please visit Epic Games’ website to know more about the back bling of Red Knight called Red Shield.