As one of the last spy themed challenges, the players of Fortnite have to steal the security plans from the Yacht, the Rig, or the Shark to earn a new skin style. Please read the whole article to find out the way.

Since the release of Chapter 2, Season 2, the player of Fortnite have been hard at work completing spy themed weekly challenges to earn XP and rewards. About two week later, the most dedicated players should have finished at least 18 missions and received the last task to unlock the Shadow or Ghost style for Brutus. This last thing involves pulling out all of the stops to pull off the greatest spy heist in game. 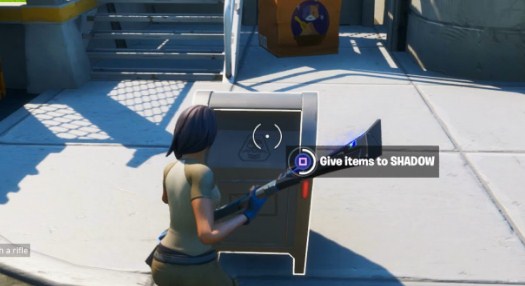 The last mission that gives reward the Brutus skin style depending on allegiance has players sneak into an enemy base, grab the security plans, and then deliver the stolen plans to their faction. All the plans are able to be taken from three new points of interest: the Yacht, the Rig, and the Shark located in the northeast, southwest, and northwest corners of the map respectively. Please take a note that teaming up with your friends will give you a better chance to survive storming an enemy base that is sure to be filled with the other players looking for the plans or eliminating those on the mission.

To do this, you need to drop or proceed towards the Yacht in the northeast and try to enter the vessel without alerting any henchmen on lookout. This thing is able to be easily accomplished by cutting through the exterior near the surface of the water. After reaching the bottom floor of the yacht, you need to walk past the kitchen where you will find the server. While facing it, hold the interact button in order to steal the security plans.

If you want to try this method, you need to go towards the Rig located in the southwest and int the building where the plans will be located. After sneaking past or blasting a few henchmen into submission, the players of Fortnite have to find the server with a computer screen at its center. Please walk close enough and hit the interact button when prompted to download the security plans.

To steal plans from the Shark, you need to approach the Shark in the northwest but consider making a stop at one of many phone booths with disguises along the way. For those who want the quickest way in and out, go through the cave entrance to the east. Then, move up to the next floor and search for the server room located near the main atrium. Once you spot a bunch of servers, please move around until an interact button pops up and run away as fast as possible with the plans in hand. After stealing them, it is time for you to deliver them to Ghost or Shadow.