Epic Games have partnered up with Disney to celebrate the release of Star Wars: Rise of Skywalker with themed in game Fortnite content. What time is the Fortnite Star Wars event? It seems like you missed the event. 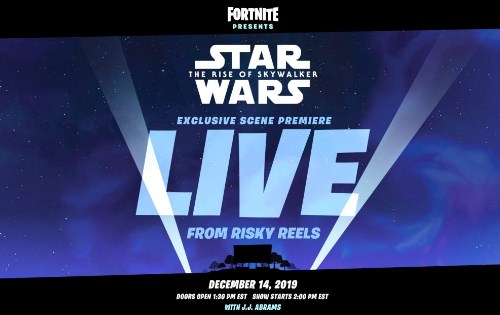 Due to what it seems like technical problems that were stopping players logging in, a Twitter account named Fortnite Status had confirmed a ten minute delay on the platform. So for the other regions, that was 7:10 PM GMT and 11:10 AM PT. All the doors to the cinema were open.

Furthermore, LTM was designed in such a way that either prevents players from dealing damage to each other or had respwning enabled so that anyone who got eliminated could just load back in right away.

The official Twitter of Fortnite have announced that the Lightsabers have been brought back to the Fortnite Battle Royale, in time for Star Wars day. The weapons are available to use again on PC, PS4, Xbox One, Nintendo Switch, and mobile. While this one is not a full blown event like before, it is something worth checking out for the time they are available. Epic Games added the caption stating that it feel like a Jedi as Lightsabers have returned for a limited time. Are you ready to drop in the game and show off their skills.

Aside from Lightsabers the Star Wars cosmetics were also added into the 2nd and 3rd May Item Shop and will likely be in the store for a few days.