What happened with Fortnite Star Wars?

Star Wars is now in Fortnite and is getting in greater numbers. Of course, if you are a veteran Fortnite player, you really know the leaks of Star Wars that will be coming to Fortnite. Then, what will you find in the Fortnite Star Wars New Scene?

Video games based on the battle royale, Fortnite often do crossovers to enrich character designs. In fact, Epic Games always do partnership with any movie industry. Then, most recently, Fortnite launched the Star Wars characters in the film to the game. 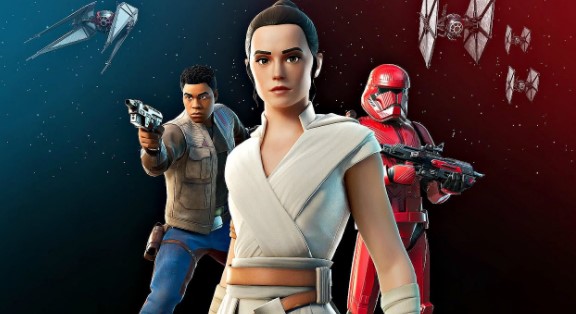 At least, there are three new skins that you can play this time, namely Rey, Finn, and Sith Trooper. Three new skins are here to mark the release of the film Star Wars: The Rise of Skywalker. To celebrate the launch of the Star Wars skins, the players can also get a blaster to a lightsaber as a weapon in the game.

Previously, Fortnite had included the Stormtrooper character as one of the exclusive skins in the game. The arrival of Stormtrooper was accompanied by the release of Star Wars Jedi: Fallen Order which also visited the Epic Games Store. Now, the players who buy the game can automatically get the exclusive Stormtrooper skin.

The good news is that this new addition to the Star Wars universe can be played in regular mode. Previously, Fortnite players might still remember the collaboration with Marvel’s Avengers where players could fight against Thanos, who was played by one of the players. The battle is entered in a special mode so that players can fight without worrying that the game status will affect the character.

Well, this event seems to have a long collaboration between Star Wars and Fortnite. It could be that the lightsaber weapon was added as a new weapon. Even so, it does not rule out that the lightsaber will also be eliminated, considering that this weapon is very overpowered.

In the game, the players can do lightsaber duels with other players. The right-click button will also function as a block which will be useful for blocking enemy fire with this iconic weapon.

The weapons that you can find in this game are also colorful. It is based on the weapon owners that you can find. There is Kylo Ren’s lightsaber with the shape of a cross, to Mace Windu’s iconic purple lightsaber. The Lightsaber is classified as a legendary golden weapon in the game and is very difficult to find.

Then, how to get the Star Wars skins?

Of course, it is so easy. All Star Wars skins now can already be purchased from the shop in Fortnite. Not only that, players can also buy Tie Fighter design gliders from First Order, Star Wars emotes, to banners. Those skins are sold for 1,500 v-bucks or around USD 15 (Rp.209 thousand). Meanwhile, the Tie Fighter glider can be obtained for 1,200 v-bucks.

Then, what do you think about this Star Wars and Fortnite collaboration? Hopefully this event will last long enough!