The developer of Fortnite called Epic Games accidentally added Eye of the Storm Tracker backpack to Fortnite. With the release of content patch 4.2, Jetpacks were not the only thing added to Fortnite. Content update 4.2, that hits Fornite servers, added the Solid Gold v2 limited-time mode and the aforementioned jetpacks.

Basically, backpacks were already a new addition to the game, and as a new item class thy take up one inventory slot and provide various benefits to the player. However, one thing Epic Games did not mention in the patch notes was discovered by the players. The item is a backpack that is named the Eye of the Storm Tracker, and considering how important sounding it is, players were surprised to see it. 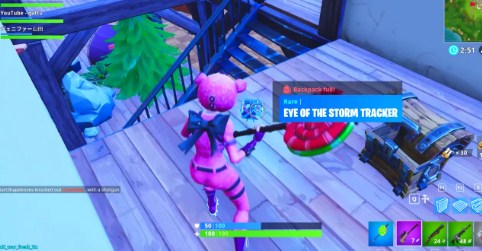 The Eye of the Storm Tracker shows up to the highlight the final location of the Eye of the Storm, the constantly shrinking play zone that Fortnirte players have to stay within throughout the game. For your information, the storm movements are random and players generally do not know where the next circle will land, so knowing where the playzone will shrink to could provide a huge benefit to whoever picks up this rare backpack.

Actually, Eye of the Storm Tracker backpack was not supposed to be there at all, as the release was an accident. When reached for comment, the representative of Epic Games named Sean Hamilton pointed Business Insider to the recent comment the company posted to the Reddit thread discussing the latest backpack, explaining the mistake. According to him, the Eye of the Storm Tracker was an idea the developer has been testing, and definitely did not intend for everyone to see it.

In fact, as the feature of the Eye of the Storm Tracker is still being experimented with, it may not see release at all. Hamilton told the users of Reddit that they are always experimenting with and developing fun and creative items for the players. The thing called the Eye of the Storm was the idea that was being tested for one of those backpacks. He added that it was not intended to make it into the v4.2 content update and they cannot promise this will ever officially be released. However, they do hope those who got their hands on it had fun while it lasted.

It is not really clear what the Fortnite Eye of the Storm backpack does, but Reddit comments suggest that it allowed the carrier to more easily see where the next safe zone is going to be, which would help planning.

Once again, the Eye of the Storm Tracker backpack was not intended to make it into the v4.2 content update and Epic Games cannot promise this will ever officially be released. However, Epic Games do hope the players who got their hands on it had fun while it lasted and the players also hope that it will be released officially one day, even the time is unknown. Please follow Epic Games for further information.