Before you straighten out your intentions to get the Tart Tycoon, of course it is really recommended for you to know the facts about the skin first. 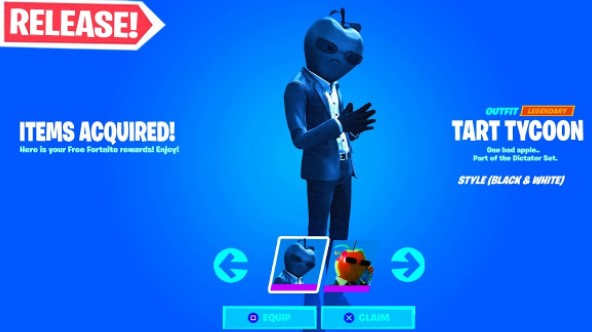 The Tart Tycoon is an unreleased Fortnite outfit. Because the cosmetic has been leaked, of course the Tart Tycoon skin hopefully will be available in the Item Shop to purchase in the near future. The Tart Tycoon skin seemingly comes with male visual that features an apple-headed. He is depicted with an evil expression.

Is it a kind of Epic Games’ way to tease Apple?

The Tart Tycoon skin is a new breakthrough result of the dispute between Epic Games and Apple.

The continual battle against Apple, it looks like leading Epic Games to release the skin named Tart Tycoon.  This skin totally will be obtained by participating in the #FreeFortnite Cup. By earning 10 points during the tournament, of course, the player will have a chance to get this odd skin.

The dispute between Epic Games and Apple Inc. made headlines unlike any other story in recent memory. Epic launched the #FreeFortnite campaign, asking Fortnite fans around the world to use hashtags on all social media in protest against Apple.

With Apple set to cut ties with Epic Games on August 28, Epic Games is totally holding a multi-platform tournament including mobile for the last time before Apple drops the hammer.

In a tweet posted earlier this evening, the team of Fortnite announced the detailed information about #FreeFortnite Cup that said this is the last days of the entire Fortnite community’s ability to play together. Apple has blocked Fortnite from the App Store, preventing players from updating to the new version. Players on iOS devices will fall behind in Chapter 2 – Season 3 while others skip to Chapter 2 – Season 4 launch on August 27.

Will you have a chance to get the Tart Tycoon skin in Fortnite?

So, we suggest you wait for its release sometime before 13th September 2020. Although Epic Games do not officially announce their releases, we are sure that the Tart Tycoon skin will be available in the shop soon.

When the skin is available, of course, you should buy it soon before it disappears from the shop because we do not know when the skin will return to the shop later.