As one of the free-to-play games, Fortnite relies in part on microtransactions for its sustained growth. Recently, according to the statement of the Epic Game engineering developer, they will plan to add the Undo Purchases option to stop accidental cosmetic purchases.

Why add the Undo Purchase button is needed? There are advantages and disadvantages to the Fortnite microtransaction system. You are able to choose the cosmetics you want with no relying on random loot boxes, but a number of players say it is too straightforward for them to purchase Fortnite items they do not want and you only have three chances to return mistakenly bought things. In the other words, there is the accidental purchases fault in the Fortnite microtransaction system, so the Undo Purchase button is needed. 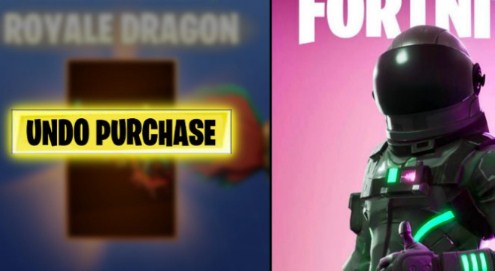 How will the Undo Purchase button works? Basically, Epic Games will add the refund token system for the accidental purchases question. They are going to introduce the Undo Purchase button to the store page that allows the players to easily refund without using up to the token within a 5 minute time window, but the premise is that you have to started a match since purchase.

In the terms of the new feature, the engineering developer of the Epic Games said on Reddit that they neither want to add friction for players nor do you want to get the advantage from accidental purchases or players regretting a purchase.

Aside from that, some players also asked why not just add the confirmation button like the Japanese version of Fortnite. He said that PlayStation 4 in Japan is a bit of special case due to X or O button meaning being swapped by default and there also being options to reverse the meanings of the buttons.

As the Undo Purchase button is still on its way, it is better for you to use the refund feature if you do not enjoy the item that you just purchased. Epic Games offers two methods of applying for refunds. The first one is simple. This one is the great way to get the V-Bucks back if you buy something you did not want, or later decide you do not like. The second one is a little more difficult compared to the first one, but it is the best one if someone goes on a spending spree.