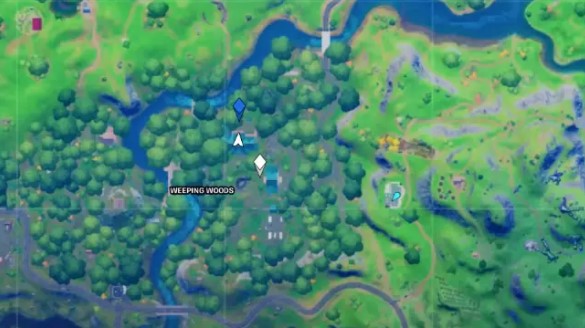 As we know that Weeping Woods is a large area named Point Of Interest added to the map in Chapter 2 Season 1. So, it may take much time to explore the Weeping Woods location to find Wolverine. Even Wolverine boss can spawn anywhere in the vicinity of Weeping Woods.

As we have explained above, Wolverine’s boss spawn in Weeping Woods. So, the main job that you need to do is to explore every corner in every area of Weeping Woods.

To find Wolverine boss, you definitely can head over to Weeping Woods or Slurpy Swamp. He actually spawns all around these areas. Then, the location varies in each round you play. Wolverine boss can even up pretty far for the south below the Slurpy Swamp location.

Once Wolverine Spawns in a spot, he will automatically start roaming around. In this step, you are able to pick up his tracks by looking for his footsteps.

Of course, for you who have still not started to complete the Wolverine Challenge, it is better for you to explore the Weeping Woods as the first spot you visit. Moreover, this challenge also allows the players to investigate mysterious claw marks. Then, the player who has not done for this challenge may keep their eyes to the marks while they are in the area.

Many players think that looking for the scratches may not be exciting as finding and taking down this new boss. Unfortunately, the player will have a chance to get Wolverine’s skin after completing all challenges of Wolverine.

Along with the addition of the Wolverine Challenge in Fortnite v14.20, there are also two updates added to the game, they are Takeover LTM and BTS Party Royale.

Takeover LTM is the third Marvel-themed limited time mode. The teams will earn points by capturing outposts and then holding on to them. It’s similar to a Domination mode.

Meanwhile, BTS Party Royale is a big event that will be held in Fortnite on Friday September 25, 2020 at 8 PM ET. The wild popular Korean Boyband, BTS will perform their songs “Dynamite” in Party Royale.