Fortnite has a lot of weapons that you are able to use in the game. Some of the weapons are M16 (Assault Rifle), Pump/ Tactical Shotgun, Bolt Action/ Semi Auto Sniper Rifle, Rocket Launcher and SCAR (Assault Rifle). In real life, you are able to have some of them since there are the real form of the guns from Nerf. How about Fortnite X Nerf controller? Let’s find out it here.

If you try to search some information about Fortnite X Nerf, you will find some guns. So, what is Nerf? Nerf is a toy brand which is created by Parker Brothers and now it is owned by Hasbro. The most notable of the toys are the dart guns that shoot ammunition from Nerf foam. Because a lot of such items were released during 1970s, the products of Nerf often feature bright neon colors and soft textures and it is same as the flagship Nerf ball. 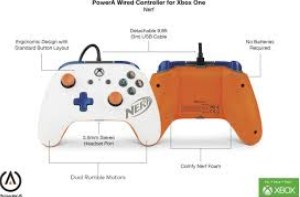 Some Nerf guns of Fortnite can be found in some stores such as Amazon, Target, EB Games, Hasbro Pulse and some other stores. The Fortnite Nerf guns that you are able to find are:

The controller that you are able to buy from Nerf is PowerA wired Controller. This controller is a good one and the design is also awesome. This controller has a comfy Nerf foam on back, detachable 9.8 ft (3m) USB cable, 3.5 mm Stereo headset jack, dual rumble motors and also 2 year limited warranty. So, if you want to play Fortnite by using this comfortable controller from Nerf, you are able to buy it now. Bring the fun of Nerf products into your Fortnite games with this officially licensed PowerA Wired  Controller for Xbox One that features a comfy Nerf foam backing.

If you want to know more about the look and also features of this controller, you are able to watch a video review about this on  a Youtube video entitled The Soft Nerf Controller which was uploaded by Kevin Kenson on July 29th, 2019.