Modern Mansion was the personal project and one of the very first gun game modes in Fortnite Creative. This one was the first try of the creator on building in a very modern and almost futuristic style. The creator is really proud of the outcome and excited to build more of this in the future. It is a free for all gun game, where it is first to 20 eliminations to win. Each elimination gives you 50 health back and a new weapon. if you would like to check out the Fortnite Modern Mansion for yourself, you can go to Creative mode and input the map code 2238-4610-2493 to one your rift portals. 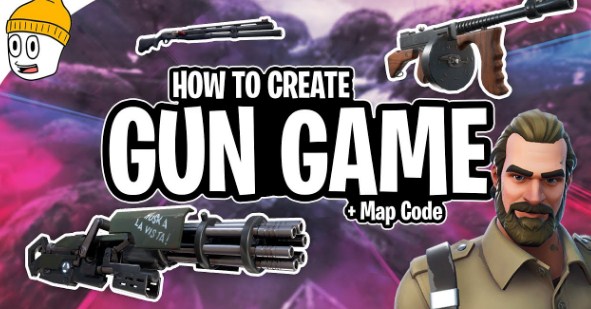 If you are looking for a nostalgic Call of Duty Black Ops experience in Fortnite, a player by the name of Jesgran made a Nuketown inspired Creative map. He did a bang yo job of recreating the look of the original Nuketwon. The map has the signature passages into the backgardens with a hollow moving truck right in the middle of the map. The details of the map go even further with the two main houses having window perches that are ideal for our sniping endeavours. With the third person perspective of Fornite, the map turns into a hectic run and gun area, offering the best gateway for the usual battle royale mode of the game. In the default settings, the Nuketown map heads up straight into gun game, the name of the game mode where you cycle through all the best and worst guns when you eliminate someone. If you are interested to try it, the code is 6722 4469 6989.

Here is the list of gun game Fortnite codes is you want more:

Talking about the gun games, recently suggested on Reddit, a Limited Time Mode or LTM with a gun game theme might be coming to Fortnite Battle Royale in the future based on a response by Dusty Devo, the name of one of the developers at Epic Games.

What makes it interesting is the idea was already on their list for future content and they seem keen on trying an LTM that has a progressive weapon loadout. Apparently, the gun game mode could feature a smaller play area with the ability to respawn, something the players have not yet seen in any mode available in Battle Royale.

The thing appears they are currently undecided on whether you would progress from stronger weapons like Legendary Scar down to weaker weapons like Common Pistol or vice versa. Either way, everyone is very excited to see how this is implemented if it ever makes an appearance, it will completely different from anything the players have seen so far.