Harbinger is a set of skins in Fortnite: Battle Royale. So far, there are 7 skin are included in the Harbinger set. Apparently, there are the new skins added for this Harbinger set on the last updates. For your information, Harbinger Set broken up into 2 Outfits (Valkyrie, Ragnarok), 1 Glider (Frostwing), 2 Back Blings (Valkyrie Wings, Frozen Shroud), 1 Harvesting Tool (Permafrost), 1 Spray (Skull and Beard). 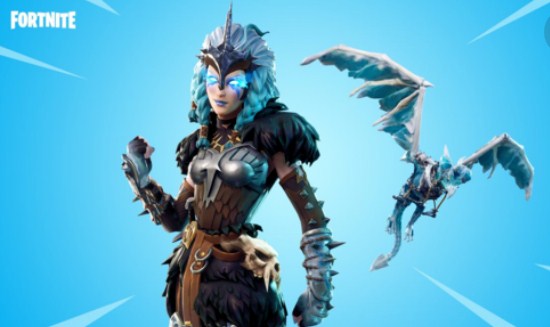 Frostwing is a Legendary Glider from the Harbinger set in Fortnite: Battle Royale. It Based on the research, it was released on September 19, 2018 and was last available 71 days ago. You are able to purchase it for for 1,500 V-Bucks from the Item Shop. Although it is labeled as a skin, but the Frostwing replaces the default glider model and replaces the player’s glider with a flying creature. The Frostwing glider goes along with the Ragnarok and Valkyrie skin and ties in with the Viking theme that started in Season 5 of the Battle Pass.

The Frostwing features a legendary blue and white flying beast which carries the player around like a glider during the drop phase. It is said that the beast has already awoken from an ageless slumber and features a skeletal bird-like appearance with a bluish skin and horns. Aside from that, the creature also features several harness which is used on the player once equipped. This Frostwing has the same functions like the default glider although it looks different entirely.

Now, you may want to know the information about other cosmetic items of Harbinger Set.