Skip to content
Homepage / Guides / How Big is Galactus in Fortnite

As the strongest mutant in the universe, many Fortnite fans wonder how big the Galactus is. A lot of rumours circulate that Galactus will cover the whole of the Fortnite map. That means that Galastuc is bigger than Fortnite island. Is it true? To prove it, let’s find out the facts for the size of Galactus on this page!

How big is Galactus in Fortnite?

The giant objects in Fortnite include Jonesy, Kevin, Christ Thedeemer, Statue of Liberty, Mecha Team Leader, The Eiffel Tower and Giant Travis Scott. In Fortnite, they are included as bigger objects than others. 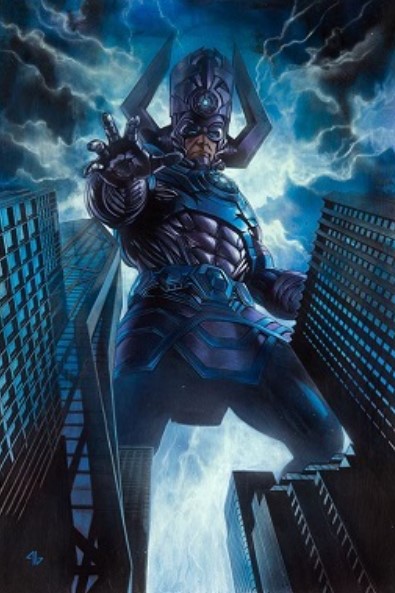 You may also wonder how Galactus looks. Well, if you’re a Marvel comic fan, you may be able to represent Galactus’s look. While, if you do not do anything of Marvel comics, of course Galactus’ character is really strange for you.

As we know, Galactus is a cosmic entity with almost the same power as a god which is depicted as a cosmic creature wearing purple armor.  He has a power called Cosmic Power and in order to survive, Galactus must suck life energy from a planet. With Power Cosmic, Galactus can do many things such as transmuting objects, reviving something or someone, reviving those who have died, and even destroying the entire solar system.

It was also shown in the comic Thanos: Epiphany # 5, where Thanos had one attack on Galactus before Galactus responded and then defeated Thanos. In terms of strength, it was clear that Thanos was far behind Galactus. However, this situation might change if Thanos had his signature weapon, the Infinity Gauntlet.

The chronology why Galactus finally comes to Fortnite?

Epic Games recently announced the new season, Nexus War. Fortnite Chapter 2 Season 4 takes up the comic book where you will battle together Thor to defeat the eater of the planet, Galactus.

Certainly, it’s not the first time Fortnite has held a superhero-themed event. Previously, Fortnite had also held events about Avengers and Batman, and recently they even presented Deadpool and Aquaman skins. While, in Fortnite Nexus War, this is the first time which has a superhero theme for one full season.

Of course, Thor doesn’t want to fight Galactus alone and summon other characters from Marvel comics. They are Iron Man, Storm, Mystique, Doctor Doom, Groot, She-Hulk and Wolverine. They will all appear as skins in this season’s battle pass.Aside from the Marvel skin, you can also see in the trailer where Rocket Racoon is also present as a pet.

Before announcing this season, Epic Games has released a short comic that tells how Thor and Galactus arrived at Fortnite Island. Moreover, Epic Games also made a few changes to the map where there was a small hole caused by Thor’s hammer.

In short, Thor who recently earned the title “The Herald of Thunder”, was seen circling the galaxy with the giant planet-eater, Galactus. They both roam the galaxy in search of some “food” to gather strength.

Thor and Galactus then find a galaxy hole that can take them to Fortnite Island. Galactus plans to eat it because the hole has special powers. However, Thor detects something strange in the gap and he immediately steps on the gas to tell the residents in it the danger that will occur.The residents on Fortnite Island don’t even believe it and consider Thor a threat. They then immediately opened fire attacks and surrounded him.

Now, all Marvel heroes who have arrived at Fortnite island are keeping busy, given Galactus has gotten closer in the last 14 days. Some leakers say that when he gets closer, the gravity will be affected a lot. None can see Galactus in the sky or under the island as he seems to be flying under the radar efficiently.

So the must-thing that you should do is to keep preparing any requirements that you will need to attack Galactus. Then, do you already know what requirements you may need? Make sure to prepare all of them as follow:

Those are what you should notice for the Galactus event. Let’s prepare right now!