Fortnite Hype Nite is the name of the new competition, pitting players against each other based on their skill level, completing to be the winner of their league and earn Hype points. Do you want to know how it works? Keep reading the article to find out the answer to the question.

The season 3 of Hype Nite is currently scheduled to take place every Sunday from July 19 to August 16, as informed on the social website of Epic Games. All contestants will be separated into three different leagues to compete in based on their Hype points. Players with no Hype or less than 1,500 Hype will compete in a division of the Open League, while those with anywhere near 1,500 to 6,000 Hype will compete in the Contender League. 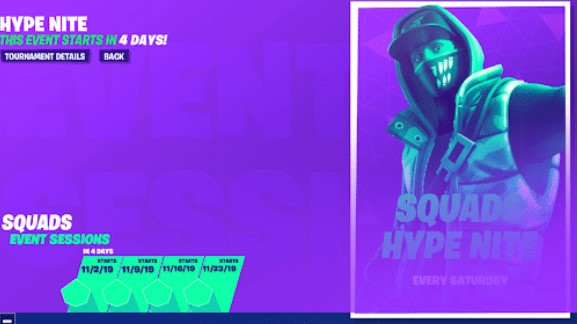 Only those with more than 6,000 Hype points will be able to compete in the Champion League, playing for a chance to rank in the top leaderboards of the game. For those who are not sure how many Hype points you have, you will want to check before registering to know what league you will be playing in.

Every Hype Nite will have a three-hour time window in which players are able to join matches. Once the session closes, though, they will not be able to join in the event anymore that day. In order to boost your Hype ahead of the Hype Nite competition, be on the lookout for Solo Hype Nites. They are held randomly in the game on Fridays and Saturdays. Joining in these single round games will give you more Hype points, giving you a higher ranking in the leagues. Aside from that, your overall ranking in the league will also give you a Hype point cashout at the end, rewarding you if you rank within the Top 50 percent of participants.

So, how does the Fortnite Hype Nite work? Joining in a Hype Nite is not hard. What is hard is remaining in the game that becomes more challenging. According to the official rules of Fortnite Hype Nite, a player is only eliminated from competing once they have depleted their health and their shield (if they have one) has been destroyed. For each player you eliminate, you will get one point. Apart from that, they will also be rewarded with bonus points during a match for placing in the Top 25, top 15, and Top 5 players, as well as get a bonus three points for winning.

Once again, Fortnite Hype Nite is pretty much like points that players are able to earn to move up through the competitive ranks during Hype Nites. As players get more Hype Points, they will be able to compete in different ranks and get better prizes at the end of the event. For Fortnite Chapter 2 Season 3, this one will take place every Sunday from July 19 to August 16 for three hours. During the event, players are able to participate in up to ten games.