The patch v13.30 of Fortnite unleashed an abundance of the brand-new skins and cosmetics into the Fortnite world. One of those cosmetics called the Galaxy Scout Bundle was the talk of the community of Fortnite.

The original Galaxy skin is considered one of the rarest and most exclusive skins to this day. Now, each player of Fortnite will have a chance to have a female variant of the famed Galaxy skin. Shortly after the update was released, it was leaked that the Galaxy Scout skin would be tied to a Samsung sponsored tournament. Details started to emerge on a Galaxy Cup, the name of a Fortnite tournament held exclusively for players of Android. The news of it led to mayhem in the community of Fortnite as players scrambled to uncover further details. 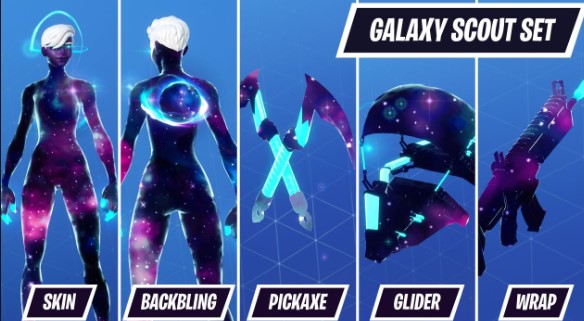 As stated before, Legendary skins go for 2,000 V-Bucks so there is a high chance of the Galaxy Scout skin to be sold at 2,000 V-Bucks. The Pickaxe of it is Epic and the Glider and Wrap both Rare. Epic pickaxes for 800, and Rare gliders and wraps for 500. All together, the thing called the Galaxy Scout Bundle would have a value of 3,800 V-Bucks. Tack on the usual discount given to Fortnite bundles and a final price of 3,000 V-Bucks seems like a fair estimate.

Once again, there is no price on skin set/pack when they are released. They will likely be available to purchase separately or as a set. The Galaxy Scout skin will cost 2,000 V-Bucks if purchased separately due to the rarity, other cosmetics will be the price that matches the rarity. If you purchase a set however, you will get a discount.

If you think 2,000 V-Bucks is too much for you, you can consider getting the Galaxy Scout skin by participating in the event called the Fortnite Galaxy Cup. For those who do not have any slight idea, Fortnite Galaxy Cup kicks off Saturday, giving the users of Android the chance to earn in-game prizes, including the all-new Galaxy Scout skin, the name of the Samsung Galaxy-themed character skin. The global event runs July 25 and July 26.

The event takes place in two sessions across the two days, which each last for around three hours. Players are able to play a total of 10 matches per session, and will earn points based on where they play in each match and how many eliminations they get. If you want to participate in the Fortnite Galaxy Cup, go to the Playlist Mode in Fortnite game and choose Galaxy Cup tournament, go back to lobby and then hit play.