As a Fortnite player, you may be wonder how much money has Fortnite made. If you really want to know its information, so you have to read this article until end because in this article we are going to give the great information about that.

According to Nielsen’s SuperData, Fortnite had a massive year in terms of revenue. The report states that Fortnite made $2.4 billion dollars in 2018. So, it make Fortnite be the top free-to-play game in the world. The Fortnite’s $2.4 billion revenue puts it above other free-to-play games like Arena of Valor and Pokémon Go. Even, Fortnite has made more money than League of Legends (LoL) that raked in $1.4 billion in comparison. 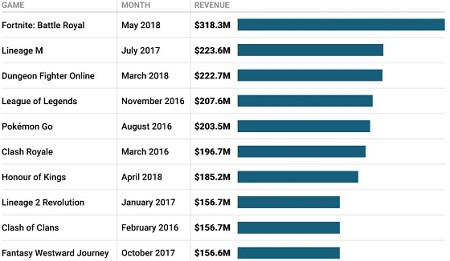 For your information, much of the $2.4 billion came from the players who buying the skins, with Epic Games constantly releasing new characters throughout the year, while also rotating popular skins back into the Fortnite Item Shop to give the players opportunity to buy the skins that they may have missed. Besides, the Battle Pass purchases were also a huge factor. According to the research, there are 34% of Fortnite players in the United States who purchasing them throughout the year. So, we are able to say that the skins are a major source of revenue in Fortnite.

Aside from that, Fortnite has also accrued a massive fanbase around the world. With the game expanding to new platforms throughout 2018 like Android mobile and Nintendo Switch. Fortnite always updates continuing to keep the game fresh. It seems like Fortnite’s dominance is set to continue into 2019. With tens of millions of Fortnite players around the world buying Battle Passes, in-game items, and converting their real money into V-Bucks, the game was able to amass billions in revenue without charging any upfront cost to the consumers (A game-changer in an era of $60 blockbuster games). That makes it the highest-earning free-to-play game of 2018 and as the highest-earning game of the year, according to SuperData. It also puts “Fortnite” earnings above “Call of Duty” and “Red Dead Redemption 2″.

By the way, what is the secret behind their success? How have they managed to make money by giving away their product? The answer is with the benefit of hindsight which is that the makers have managed to leverage the concept of exclusivity and then merge it with an enjoyable user experience with a social component to get the immense rewards.

You have to know that the Battle Pass, for all intents and purposes, generates the bulk of Fortnite’s revenue. For your information, the $10 per quarter fee gives the players an exclusive access to the game’s system updates including change to the map and character features where the free player will not have. Additionally, it allows the player to buy the optically pleasing additions for a cheaper price than if they were to buy them separately. The last word, if you want to get more information related revenue in Fortnite, so you are able to join at forum of Fortnite.