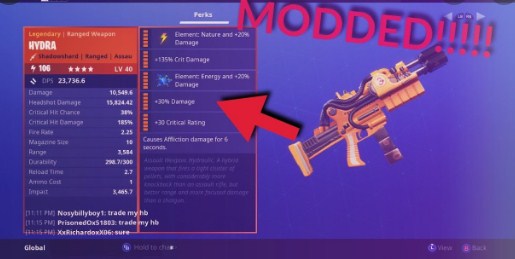 To know what modded gun is, you need to know that Epic Game added a system named a Perk Recombobulator and it was added in Patch 4.2. It permits the ability to be able to adjust perks of weapons to customized them more because since back then, you were not able to adjust the perks of a schematic that you got.

The modded gun itself is a special weapon which is a faulty weapon occasionally given by bad adjustments to the schematics and the most common ones are weapons with double elements like a Grave Digger or a Noctorno or even guns with misplaced perks like a Bullet-Chain Hydra.

Of course, the existence of guns in Fortnite is important because in the game you will use weapons or guns to be able to shoot your opponents. In the Fortnite PvE mode, there are 6 different rarity types of weapons and those are Handmade, Common, Uncommon, Rare, Epic, and Legendary. Legendary weapons.