In the final week of Fortnite Season 4, what are the challenges that you’ve completed? Have you completed all challenges at the end of the week? If yet, what is the challenge that you do not complete?

In Season 4 in this Week 10, at least there are seven challenges that you should complete. You may recognize the challenge that requires you to drive a  boat from the Fortilla to the Authority in less than 4 minutes. Are you ready for it? Let’s check the guide to make it easier!

To drive from the Fortilla to the Authority in less than 4 minutes is such a hard way if you really do not know where to find the boat. Besides, you need to complete this challenge no more than 4 minutes. Of course, the boat in Fortnite can be found in certain locations. Where to find the boat will be explained in the next section. Here, we’ll focus on driving a boat from the Fortnite to the Authority.

Then, if you are not sure to be able to complete this challenge, don’t worry, Dude. In this post, we are going to share the quick and easy guide to drive a boat from Fortilla to the Authority no more than 4 minutes.

The primary thing that you have to recognize when you want to complete this challenge is to already have a boat. To note, if you quit the boat, the challenge automatically will be over and you cannot restart the challenge until you go back to The Fortilla.

Once you grab a boat at POl, you surely can drive it up towards Slurpy Swamp. After that, you can head up the river through Weeping Woods. After you get through Weeping Woods, you have to go to the large circle of the water which surrounds The Authority. That’s it! The challenge of driving a boat from The Fortilla to the Authority is finally done.

The challenge to drive a boat from the Fortilla to the Authority is surely enough and comfortable if you follow the route as we have explained well. 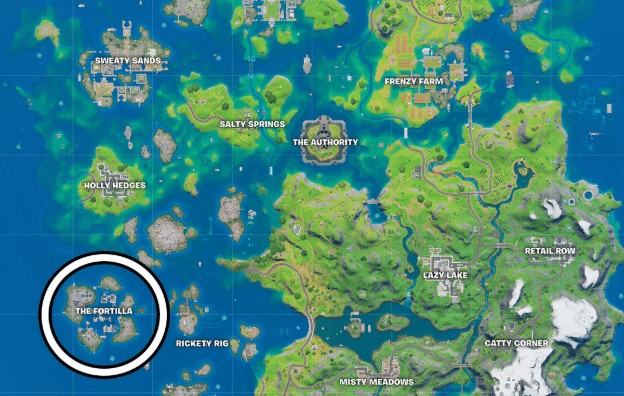 The Fortilla here is one of the Fortnite locations which is added to the Fortnite map in Chapter 2 Season 3. It is located to the left of Rickety Rig. A lot of players are not aware when landing there because there are many other Fortnite players who want to land there too for Ocean’s Mythic items.

If you know that this is a dangerous place to land on the map because there will be a boss and Henchmen here. When a chance comes, Henchmen will start shooting at you. So, it is better for you to wear a disguise when you land there.

As Fortnite Chapter 2 Season 4 starts, the Fortilla has mostly  been destroyed and ravaged. Then, Ocean and the Henchman are gone along with Ocean’s Mythic Weapons and her Keycard.

Furthermore, the Fortilla appeared to be a base of operations for E.G.O and then has many places and shops for their members. This means the Fortilla was pretty large with Henchmen guarding the POl.

The Authority, where is it?

The Authority is a named Point of Interest in Fortnite Battle Royale which was added in Chapter 2 Season 3. It is located inside the coordinates D4, D5, E4 at the direct center of the Fortnite map, E5 east of Salty Spring, Southwest of Stark Industries, South of Risky Reels northeast of Weeping Woods.

Now, the Authority was changed to the Ruins in last week’s update introducing the Fortnitemares 2020 in Midas’ revenge event that is why we are not sure if the challenge of this week will go live. From this case, you may notice that the Authority is not named on the Fortnite map but it is the Ruins where you have to drive a boat from the Fortilla to the ruins in no more than four minutes.

Boats, where to find?

Finding the boats in Fortnite is not a hard way to do as long as you notice that you play Team Rumble. To complete the challenge in driving a boat from Fortilla to The Authority, of course the boats can be found at the Fortilla. But the problem is the boat at Fortilla will be up for grabs due to the other Fortnite players trying to take it for the challenge.

It means there will be a lack of driveable and usable boats for everyone who wants to complete the same goal. If you meet the kind players in-game, they may allow you to grab their boat at Fortilla when they begin to drive to ruins of the Authority. Well, the challenge is completed for you even though you just hop onto the boat at the beginning than toward the Ruins.

You may also wonder what the challenges that should be completed in Week 10. However, in this final week, completing all challenges is such a great achievement for all Fortnite players. Why? It is because challenges in Week 10 offer the players any kinds of obstacles that make them so complicated to be able to complete the challenge.

As the Fortnite dataminer leaked, there are a total of eight or nine challenges in this week but there are only seven weekly challenges available. Here is a list of the challenges from Season 4 Week 10:

(5) Eliminate Opponents by hitting them with vehicles