Fortnite Chapter 3 Season 2 may be different from previous seasons, however it is similar in at least one way. The Battle Pass has been complicated to level up over the past several seasons. Even with the introduction of Milestone Quests, it still takes the players time to level up and unlock rewards like the Doctor Strange skin.

This frequently forces the gamers to turn their attention to other XP-earning methods. Several of these might be frowned upon by Epic Games, particularly certain XP glitches. We get information that there is a Fortnite player who has found some XP glitches in Creative mode, one of which rewards the players 100,000 XP in a minimal amount of time. 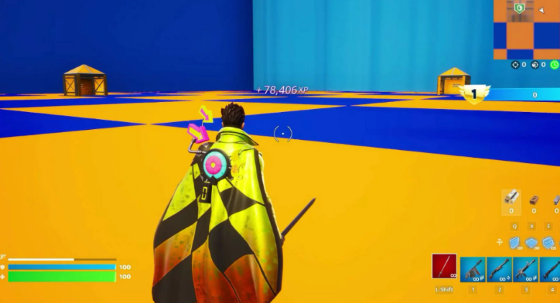 As we said before, there is a Fortnite player who has found some XP glitches in Creative mode, one of which rewards the players 100,000 XP in a minimal amount of time. To get 100,000 XP in Fortnite, you are able to use those XP glitch maps.

The first XP glitch map code is 9672-7168-4007. The players have to enter a private game for this XP glitch map. For your information, inside the map, there are blue arrows on the ground, one of which points the participants to a blue wall. The wall can be walked through, and the players have to do so. In the room, there is a phone booth next to the “rate this map” item. The players have to climb up onto the phone booth, by using the item if necessary. Then, they are able to mantle up onto what appears to be an invisible floor. In the corner above the “Shop” sign, the players have to do an emote. Afterwards, they are going to be transported into a secret room with only one button to interact with. Doing so is going to begin the XP earning process, which is potentially up to 100,000 XP in only 10 seconds.

The second XP glitch map code is 6018-3393-6082. The players have to navigate to the corner where there is a sign for the map. At the edge of the map, there is a secret button. This is going to transport the players into another secret room where they are able to interact with one of two secret XP buttons for starting the flow of XP once again. At the time of writing, these XP glitch maps still award XP. But Epic Games tends to act quickly on those. They are not big fans of the players using Fortnite XP glitches or Creative maps like this and have banned some. If the players try to use these XP glitch maps, it is possible that Epic Games stepped in.