Skip to content
Homepage / Skins / How to Get Fortnite Agent Fishstick

Fishstick is the name of a Rare rarity skin in Fortnite Battle Royale that was released on December 26, 2018 and was last seen on December 29, 2019. This one was the third skin to come with a back bling. Apparently, buying the skin will grant you the Saltwater Satchel back bling. The real skin itself depicts a humanoid Koi or Flopper.

There are four styles of Fishstick. Those include Default, Pirate, VR, and the World Cup 2019 exclusive version. Every additional styles, coincidentally, corresponds with the theme of the season. For instance, Season 8 being pirates, Season 9 being futuristic, and the fourth version of the World Cup 2019 Exclusive. 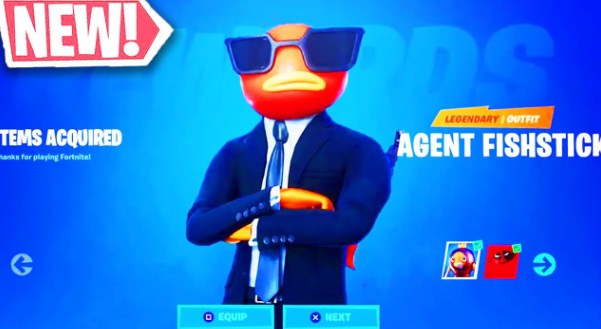 The description of Fishstick references Maki Master, the name of the skin that is part of the Sushi set. Since the first time its release and due to its popularity, the Fishstick model has been used in three other skins that sold separately. Those are Triggerfish, Frozen Fishstick, and Contract Giller.

Contract Giller is known as Fishstick Agent. If you want to know more about this and hos to get this Fortnite Agent Fishstick, please do not stop reading the article until you reach the end of the sentence.

Apparently, the leaked Fortnite Fishstick Agent skin rework Contract Gillder will be in the Item Shop as a skin pack with 1,000 V-Bucks. For those who do not know, the Fortnite v12.10 patch came with a heap of the new cosmetic leaks attached, as most patches of Fortnite do. A lot of people believe that the most noteworthy leak was the new Fishstick skin Contract Giller.

The additional of the Fishstick Agent or Contract Giller will be the seventh and eighth different Fishstick style that Fortnite has. In addition, the Dorsal Destroyer will also be a wonderful pet style back bling.

However, Fishstick Agent or Contract Giller will not be coming to the Item Shop in a traditional fashion. This one will be a skin pack that you will have to buy with the real money. Just like some other Fortnite skins, including the Dark Love Ranger, you will also be able to complete the challenges if you want to unlock 1,000 V-Bucks. Please keep in mind that you will not be able to grab the V-Bucks right away. You will have to complete 7 daily challenges in order to get your 1,000 V-Bucks, meaning it will take up to a week.

Each challenge unlocks in stages. It means you are able to get at least 100 V-Bucks right away. According to the rumor, the skin should be in the Item Shop soon, so you could save your daily challenges and complete all of them once you buy the skin. The thing will give you 300 V-Bucks immediately.