Do you want to get John Wick skin on Fortnite? If you want to have this skin, you need to know how to get it. Is it possible to get this skin for free? Well, let’s find out whether you can get it for free or not.

John Wick skin officially came to Fortnite Battle Royale in the Season 9 Week 2 update where it includes a limited time mode crossover event for John Wick: Chapter 3 Parabellum. This brings a special Wick’s Bounty game mode, a John Wick skin and more. The presence of John Wick skin in Fornite may not be a huge surprise for Fortnite players because previously Fortnite added in Wick’s house from the first movie as part of the Season 9 update. 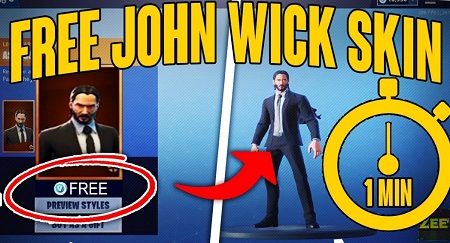 John Wick skin is categorized into a Legendary skin and it was released on May 16th, 2019 and last seen of this skin was on December 28th, 2019. One of the more popular skins in Fortnite was The Reaper skin and it was pretty much just referred to as the John Wick skin. Fortnite players who have that skin might be slightly disappointed but now there is an official John Wick skin which bears the name and looks exactly like Keanu Reeves who plays the character.

How to get this skin on Fortnite? You are able to buy this skin in the Fortnite Item Shop for 2,000 V-Bucks when listed. Together with skin, you are also able to buy a bunch other Wick-related items such as a black backpack (back bling), a black umbrella (glider), and a sledgehammer-style pickaxe. According to the site metro.co.uk, you will not be able to unlock this skin until you have reached the end of the season 3 Battle Pass. The Battle Pass is made up of 100 tiers that players have to progress through to get rewards and Epic Games estimates that would usually take 75 to 150 hours of plat to reach the end. You are able to pay to progress though more tiers or you are able to do it the harder way and grind their way through it by earning XP and also completing daily tasks and weekly challenges. The Season 3 Battle Pass costs 950 V-Bucks and it comes to around £7/ $10.

Is there any way to get John Wick for free? Well, it seems there is no way to get it for free. If you search videos about getting John Wick skin in Youtube, there are some videos about it. However, some of them may be just a clickbait since they order you to click on their subscribe button. Some of them, there are also giveaway. You can try to join the giveaway, who knows that you can win it.

However, something free must be suspicious. Fortnite comes with cool stuff and usually the stuff must be gained through the challenges or buying it on Item Shop. If you find something free in some unofficial sites or videos, you need to be careful and it is better for you to avoid it since it might be a scam. So, to get John Wick skin, it is better for you to buy it in Item Shop.