Epic Games seems to promote their new RPG title Battle Breakers in Fortnite. It is shown with offering another free skin for the game’s Save The World mode. You may have seen the look of the skin which is Kurohomura skin and you think that the skin is awesome so that you want to have it. But, you do not know how to get it so that you need some guides to be able to get this skin.

This skin is an Epic skin from the Battle Breakers set. It has been leaked and in the official description, it is written:

Born of fire and destined for greatness.

If you see this skin, it is scary enough. This skin is a male and he has red body and some black tattoos in some parts of his body such as on his shoulders, on his stomach and on his upper part of his face. He has white hair and also white beard. His white beard is long and it is braided. His hands features iron gloves and he also wears white pants. This skin looks strong with this scary appearance. This skin has a back bling and the name of the back bling is Fire Vortex back bling. 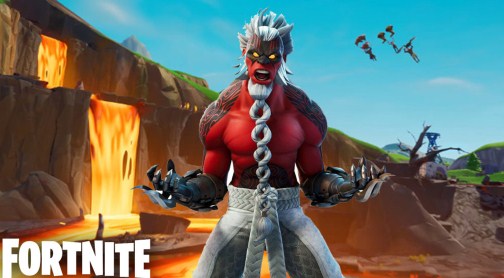 How to Get Kurohomura Skin in Fortnite Save The World?

If you want to get this skin in the Save the World, you have to do some serious grinding on Battle Breakers with a lot of bosses to take on and defeat in combat. If you play the game and can destroy the enemy bosses, you will be rewarded with XP. If you have reached the in-game milestone of Level 50, then you will be gifted with the Kurohomura skin from Battle Breakers. If you have got the Level 50, you will not have to do anything on Fortnite because the skin will be in your inventory.

Some of you may wonder whether this skin will be in Fortnite Battle Royale or not. Until now, Epic Games has not yet officially confirm whether we will see Kurohomura skin in the Battle Royale mode or not. But, leaks show that this figure will appear alongside Razor in the in-game store corner sooner.

Watching the Gameplay of Kurohomura Skin in Fortnite