The Fortnite Season 6 Week 9 challenge include getting airtime in vehicles, dealing damage to structures with dynamite, and getting Rocket Launcher and Grenade Launcher eliminations. Actually, there are seven challenges in total. Those are divided into two, free challenges and Battle Pass challenges.

The free challenges include getting 30s of airtime in a vehicle (0/30), getting a score of 10 or more on different Carnival Clown Boards (0/3), and Stage 1: Consume Mushrooms (0.5). As for the Battle Pass challenges, they include deal damaging to players with a Clinger, Stick Bomb or Grenade (0/300), deal damaging to opponent structures with Dynamite (0/10,000), Rocket or Grenade Launcher Eliminations (0/3), and Stage 1: Deal Damaging with Grenades to opponents (0/100). 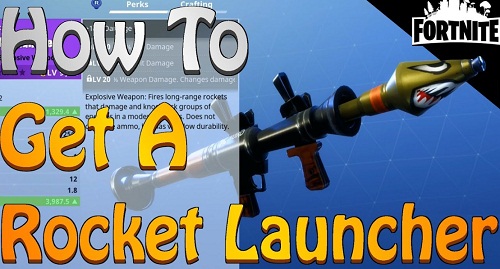 This page will explain the third Battle Pass challenges of Season 6 Week 9, which is Rocket or Grenade Launcher Eliminations (0/3), especially the method of how to get Rocket Launcher in Fortnite. Before anything, it is better for you to know More about Rocket Launcher.

The Rocket Launcher is the name of the explosive weapon in Fortnite Battle Royale. This one is available in Uncommon, Rare, Epic, and Legendary variants. It fires a single slow rocket that does extremely high damage across a wide area, but it takes a long while to reload and uses rockets, the rare ammo type.

The legendary variant of it is able to be obtained from Supply Drops. In the past, the Rocket Launcher used to have a Rare variant. It was before Patch 5.40 removed it from each mode except High Explosive and Unvaulted LTMs. It was added to Creative in Update 10.40.

Fortnite Chapter 2 Season 1 added the new Common and Uncommon variants of the Rocket Launcher, along with the Rare variants unvaulted. However, the Common variant quickly got removed after the update.

The thing called Rocket Launcher is really effective to destroy buildings. Aside from that, when attacking a player you are able to use it to greatly reduce his health and then switching to a shotgun or SMG to quickly eliminate your enemy.

How to get Rocket Launcher in Fortnite? The first one is vending machines. You need to look for blue, purple and yellow vending machines as those are able to spawn with explosive weapons. Paradise Palms is a great place for this strategy. You are able to find up to three machines in the town. The second one is supply drops. Looting those drops has a 25% possibility to spawn one of the 3 explosive weapons. Please stay out of the action at first and wait for the supply drops to come in. The third one is chests. Those have 1 3.4% possibility to spawn Rocket Launcher of Grenade Launcher. You need to pick a location where you know the chest spawns and go through them all. The process might take a bit, but if you keep opening the chests while you move through the map, explosive weapons will pop up every now and then.