Skip to content
Homepage / Guides / How to Get Thor's Hammer Fortnite

Epic Games, the developer of Fortnite, previously collaborated with the Marvel Cinematic Universe (MCU) to enliven Avengers: Infinity Wars. In the crossover at that time, Thanos and the Infinity Gauntlet also enlivened the world of Fortnite.

Such a good cooperation between Epic Games and Marvel, it surely leads Epic Games to show the Marvel Superhero in Fortnite. The coming of Superhero to Fortnite is surely completed with each weapon.

Who is the Marvel Superhero that comes to Fortnite? 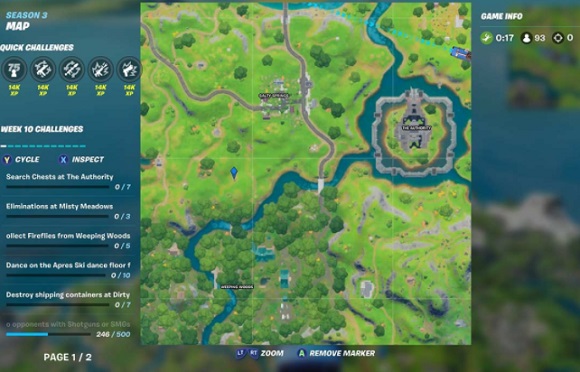 We guess that if you are a Marvel comic and Fortnite lover at once, you already know who the Superhero that is in Fortnite right now.

Certainly, you will be amazed with Thor’s hammer which has landed in Fortnite, won’t you? However, you have to find Thor’s Hammer in Fortnite.

How to get Thor’s Hammer?

Of course, when you decide to find any items in Fortnite, the first thing that you have to do is to find the location. So as with Thor’s Hammer, if you really want to get the Thor’s Hammer, you should know where the hammer is landed.

The Thor’s Hammer can be found in a crater due north of Weeping Woods and West of the Authority. The closer place is the Salty Spring area.

After you get there, there is not much you can do. Need to know that the Thor’s Hammer is indestructible and no amount of firepower can break it. It means that getting Thor’s Hammer is not as easy as you thought.

Once you find the Thor’s Hammer, of course, you cannot do much with it. But, we hope that Thor’s Hammer will be added as a mythic weapon to Fortnite  over the course of the next season. If Thor’s Hammer is released to Fortnite as a weapon, we guess that a lot of players will be interested to have this sturdy hammer as well.

Although you cannot do anything with Thor’s Hammer after you find it, you surely still find other people nearby. So, it is so better for you to stop at one of the shacks nearby to get some basic loot there.

You may wonder why the Thor’s hammer suddenly landed in Fortnite Battle Royale. Well, if you really want to know about it, you can absolutely read the recently released Marvel comic book that can be found in the Fortnite Battle Pass screen of the menus.

Of course, on the menu, there will be detailed information that explains about what caused Thor to drop his hammer into this world.

Whatever will be, but it is so interesting to find the facts about Thor’s Hammer in Fortnite. So, keep it up!