In Fortnite, there is a Replays feature. With this feature, you are now able to save your matches and watch them again from any angle, and share those hype plays with the whole squad. Aside from that, you can adjust all sorts of cameras and settings to capture amazing cinematic moments on the battlefield. In addition, you can also use this one to analyze the match, learn where you can improve, develop strategies and take that Victory.

Follows and orbits around the selected player. 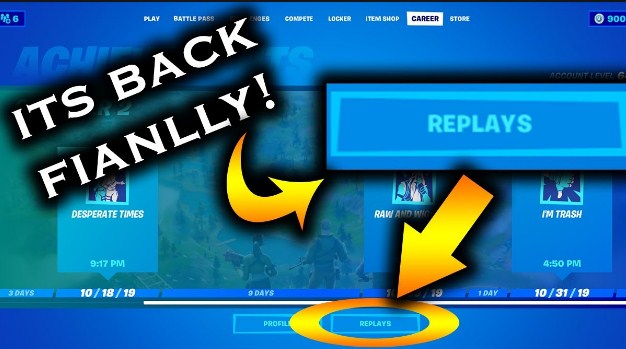 Drone style camera that is loosely attached to the selected player.

Drone style camera that is free to fly around the island.

This camera shows what the selected player saw during gameplay.

Sometimes, the Replays feature is not showing up. If this kind of thing happens to you, please do not be panic. You are not the only one facing this kind of issue. It might sound weird but it is actually an intentional period of downtime that specifically targets the Fortnite Replays system. Epic Games stated on their official Twitter account that they have disabled Replays in order to investigate the problem.

Replays has been one of the most requested features since the Fortnite Battle Royale is rising. Unfortunately, this one can put serious strain on both your handware and Fortnite servers. In this case, it needs constant maintenance.

Actually, Epic Games have not gone into specifics about the issues which was occurring, but they explained that there was a problem with the feature that needed some attention. While they investigated, the ability to view replays was been turned off, but is not that bad. Epic Games confirmed that any matches played during the downtime will be saved and watchable now that everything is back up and running. Aside from that, you are also able to always use the own capturing equipment of your device, if you are playing on PS4, Xbox One, or PC, you will be able to record your gameplay with the inbuilt technology although it is not as powerful compared to the full functionality or replay mode.

Then, how to get your Replays back in Fortnite? epic Games have not provided an estimated time for when the function will be back online. It could take minutes, hours, or even days. As stated before, do not worry about losing wonderful footage while the feature is disabled as Epic Games has confirmed that all replays will be saved during the downtime, meaning you are able to play everything as normal and the footage should all be fully watchable when the important fixes have been rolled out.